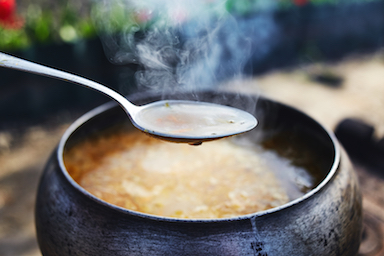 Soup has been termed the vestibule to a banquet. We call it the only true foundation to the principal repast of the day, whether it be a Cottage or a Cabinet dinner. With this belief we hold as maxims, that the French take the lead of all European people in soups and broths, that the Scotch rank second, the Welsh next, and that the English, as a nation, are at the very bottom of the scale; and farther, that if soup be the foundation of a good dinner, it is equally true that beef is the only foundation of good soup. Whether brown or white, plain or rich, the basis must still be beef,—fresh-killed, juicy young beef, and soft pure water. The essential qualities of soup are, that it be nourishing and restorative. It is the food of childhood and extreme old age, of the declining and the debilitated, for whom the soup-pot performs half the offices of the digestive organs. With these invigorating and salutiferous qualities, the mildest, the richest, and the most poignant relishes may be combined, by the judicious employment of the numerous ingredients which go to the composition of soups. The capital defect of soups is generally not so much the want of meat as of the time necessary to the due concoction of a rich fluid composed of so many ingredients. These defects it is vainly attempted to conceal by the excessive use of pepper and herbs. The following elementary rules, from the French of the chemist Parmentier, were assumed by the Club as practical directions to the cook. 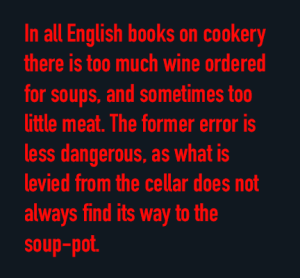 Some soups are very good when made the day before they are to be eaten, as the top-fat can be removed in a cake, and they attain more complete consistence… without losing their flavour, but they need not be seasoned till wanted; and should then be slowly heated to the boiling point: if permitted to boil, some soups will lose part of their flavour; and of soups with meat, the meat will harden. Excellent judges differ on this point. Many think every hot preparation best when fresh cooked, and soups of the number. Of this kind are brown soup, hare soup, soup of game of any kind, giblet soup, and generally all soups made of the meat of animals of mature growth. Soups into which vegetables and young meats enter in any quantity, are best when fresh made, as those things have a strong tendency to ferment. This also holds of veal and fish soups… In all English books on cookery there is too much wine ordered for soups, and sometimes too little meat. The former error is less dangerous, as what is levied from the cellar does not always find its way to the soup-pot. All roots, bread-raspings, barley, and meal, for plain common soups, ought to be put in as soon as the pot is skimmed, when the roots are merely intended to thicken and flavour the soup. When to be cut in pieces and served in the broth, an hour’s boiling is fully enough for carrot, turnip, onions, &c. Many things are used to thicken and give consistence to common soups and sauces. The best perhaps is fine toasted oatmeal, potato mucilage, or bread not too stale. When the soup or gravy is too much boiled in, the waste must be supplied with boiling water or broth; and though we strenuously recommend, in general, close-covered pots, yet when the soup is watery and weak the lid may be taken off till the watery particles evaporate; for thickening gives consistence, but not strength… Broth made of fat meat may have a larger proportion of greens, leeks, cabbage, or whatever green vegetable is used, than leaner meat. The best plain browning for soups, sauces, gravies, &c., is red wine, soy, or mushroom or walnut catsup… The cook is entreated to bear in mind, that the elegance of all brown soups consists in transparency, united with richness and flavour; of white soups, and fish and vegetable soups, in the goodness of the desired colour and fullness on the palate. 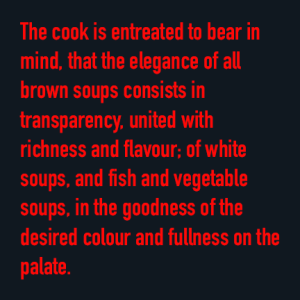 Soup may be made in an infinity of ways. There is no end to the combinations of meat, games, fish, herbs, roots, spices, and mucilage, with water; but the basis of the best soup is, as we have said, beef,—fresh, full of juices, young, succulent, and not too fat,—the lean parts of a fat animal. 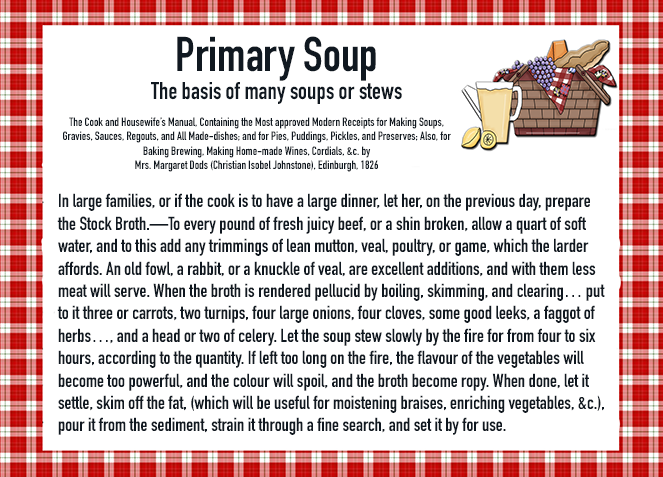 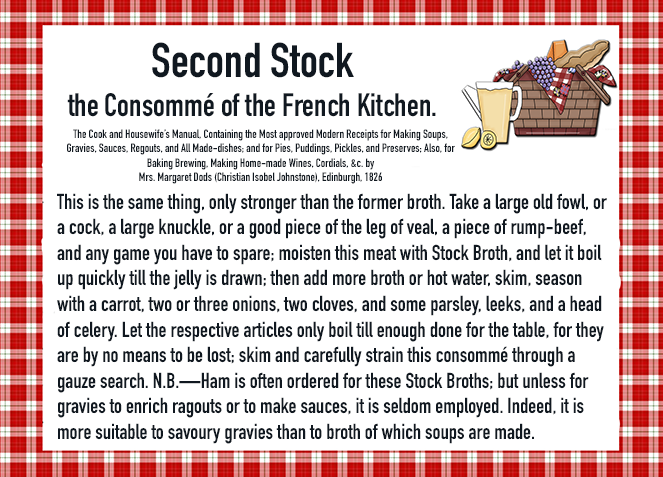 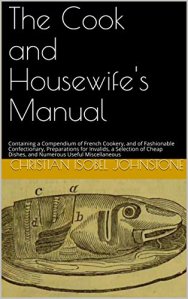 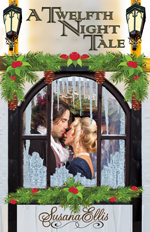