Lady Pendleton, Damian Ashby’s eccentric aunt (see the epilogue to Treasuring Theresa on Susana’s web site), is visiting Susana from the early 19th century. She’s intrigued by life in 21st century Toledo, Ohio, and, of course, Susana is thrilled to have the opportunity to pick her brain about life in Regency England. It certainly gives her a great deal to write about in Susana’s Parlour! 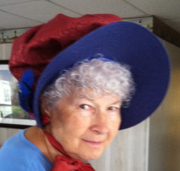 Lady P: I’m afraid you find me alone this morning, since Susana is so occupied with her accounts that she begged me to talk to you on my own. Of course, I did tell her that it isn’t strictly necessary to pay the tradesmen’s bills on time; mine are often several months in arrears—due to my demanding schedule, you know—but the merchants with whom I do business have no concerns about being paid eventually. [Sigh] But she insists that there are dreadful penalties for tardiness in meeting one’s obligations, such as one’s credit rating being lowered, whatever that means, so I graciously agreed to serve in her stead once again. 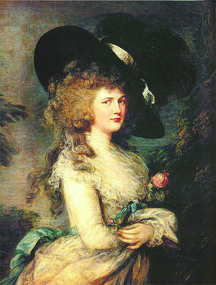 She just finished reading a biography written about my good friend Georgiana, the Duchess of Devonshire, and she said she thought her readers would enjoy hearing about Georgiana’s political exploits, and mine too, of course, since I did campaign with her on several occasions.

Well, I suppose I must first mention the brilliant salons at Devonshire House where all the important players in the Whig Party used to meet and have the most intriguing discussions. I was able to attend only a handful of times when Pendleton was out of town—he would never countenance that sort of thing, you know, being a Tory from way back, although I did try at first to explain to him that politics is not something that can be inherited like money or a house—but when I did I was simply fascinated. Georgiana was astonishingly intelligent, you know. If she hadn’t been a female, I’m sure she would have risen to Prime Minister, and I can assure you that if she had, the country would have fared ever so much better than it did at the hands of the men! Not to mention her sense of fashion.

But…no, those of the female sex were not even allowed to vote, so it was quite a scandal when Georgiana and her sister and several other prominent women marched in favor of Charles James Fox in the early days. Charles was a distant cousin, you see, and they were quite cozy with one another. It was really quite something to see, Georgiana leading the women, all carrying signs, through the streets as the onlookers cheered. She had such a presence, you know. I believe she could have convinced them to vote for a monkey and they’d have done so quite happily.

Why, I’ll never forget the day an Irish dustman approached her as she was descending from her carriage and said, “Love and bless you, my lady, and let me light my pipe in your eyes.” [Chuckle] She was forever saying that “After the dustman’s compliment, all others are insipid.”

But Devonshire put his foot down after someone started a rumor that she was selling kisses for votes—how ridiculous that was, but people will believe the most ridiculous things when they see those scandalous prints that make the rounds. So she had to restrict her political activities to less public venues, although everyone knew she still had the ear of all the prominent Whigs of the time.

Georgiana had a great many faults, of course, but I do give her credit for her role in opening the door for the female sex in the political arena. Why, at the time I really expected that women’s suffrage was right around the corner; how shocked and disappointed I was to learn afterward that it was a good hundred years before women were allowed the right to vote. [Shaking her head] That daughter of Kent’s—what was her name?—Victoria—has a lot to answer for, I vow, for her part in setting the cause of women back for so many decades!

Lady P: Oh dear, Susana says I have neglected to mention that the Whigs—or at least the modern Whigs of my day—supported changes in government and society, giving more rights and power to the middle and lower classes and less to the wealthy aristocrats. Why, Georgiana and Fox both supported the American Revolution, and were called traitors by the Tories for it on many an occasion, even after the war was lost. And Georgiana did support the French Revolution at first, even being a particular friend of Marie-Antoinette, until she saw firsthand what was happening there with the guillotine and all. No, she always used to tell me that she hoped that dealing with the situation with the lower classes before it got to the breaking point would stave off the occurrence of such a horrific uprising here in England.

Because really, even if there are as many as ten thousand of us in the ton, we are greatly outnumbered by the common folk, and one can only press them so far before someone draws their attention to the strength of their numbers and leads them into an uprising. [Shuddering] That’s why Pendleton and the Tories opposed education for the masses. Ignorance makes them more malleable, of course. What would he say if he were here to know that Damian’s wife Theresa supports a free school for the common folk in Granville and Letchworth? Thankfully, he passed on to his reward long before. I miss him dreadfully, of course, but he could be so obstinate at times. I always attributed it to that Scottish great-grandmother of his…

And, as always, please do comment if you have any questions you’d like to ask Lady P about the late Georgian/Regency era. She does love to chat!

Episode #3: Lady P and the Duchess Who Lost a Billion Dollars

Episode #6: Lady P Dishes the Dirt on the Duchess of Devonshire

Episode #7: The Political Exploits of Lady P and the Duchess of Devonshire

Episode #9: In Which Lady P Depletes the Cooking Sherry During Her Discussion of Caroline of Brunswick

Episode #11: In Which Lady P Talks About Hannah More and the Rights of Women

Episode #13: Lady P Discusses the Luddite Uprising, the Assassination of Spencer Perceval, and the General Unfairness of Life

Episode #14: In Which Leticia, Lady Beauchamp, Pops In For an Interview On Her Personal Acquaintance With Princess Charlotte of Wales