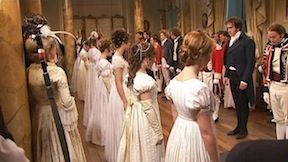 By the early nineteenth century, imitation of the classical was the rage in Europe, in architecture as well as fashion. Ladies’ gowns became simpler, with low necklines and ribbons tied beneath the bust, usually white due to a mistaken belief that the white marble statues being excavated in Greece were the original color. (They weren’t; the original brightly-colored paint had worn off.) Napoleon preferred ladies in white, and even though Britain and France were at war during this time, French fashions were all the rage.

Thin fabrics were de rigueur, muslin being the most popular, followed by silks and satins. As the new century progressed into the Regency and beyond, ladies’ gowns became more ornate, with another gown worn over the classical one, either a shorter length or with the front panels open to reveal the under-dress. Trims became more and more ornate, with ribbons, bows, and furbelows everywhere; collars of Elizabethan lace took the stage. By 1815, colored and grander fabrics were back.

A fashionable lady had an extensive dress wardrobe, including:

Even in the dead of winter, many ladies would rather shiver in their flimsy gowns than be so unfashionable as to wear a heavy wrap. However, they did have shawls—Kashmir shawls had the advantage of being both light and warm—and various types of coats and jackets. A pelisse was an elegant overdress with long sleeves that buttoned down the front. A mantle was a rectangular fabric gathered at the neck. A spencer was simply a short jacket that reached the waist of the gown. Cloaks were often lined and/or trimmed with fur.

Lizzie wears a spencer over her dress. 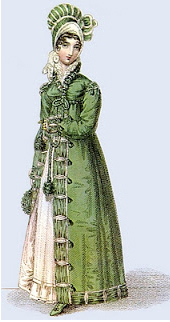 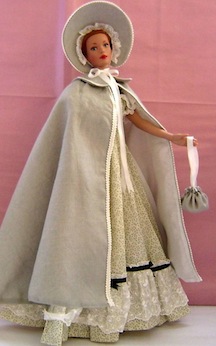 The lady wears a mantle and carries a reticule.

For the most part, shoes in this period were “straights,” meaning there was no left or right shoe. Pumps made of embellished kid called slippers were very popular. Ladies had half-boots for walking, and stout boots for cold weather might be fur-lined. White silk hose tied at the knee (or later, the thigh) were often decorated with flowers or bowknots. 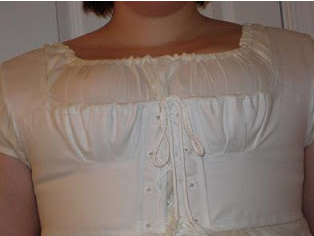 short corset common in the Regency

Under-drawers were not widely worn until after the Regency, around 1820. Short corsets with shaped cups for the breasts were common, although longer corsets were available to assist those with problem figures. A petticoat called a chemise was worn under the gown. 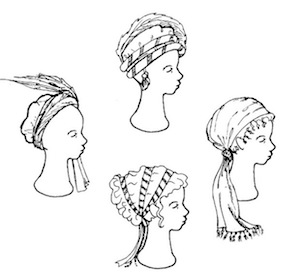 Various styles of turbans popular in the Regency

A fashionable lady had ribbons, jewels, combs, plumes, and hairpieces to dress up her hair for elegant evenings. Gone was the “big hair” of the previous century that towered so high that once a lady’s hair caught fire from the chandelier (Georgiana, Duchess of Devonshire). Classical hairstyles to match the classical gowns were “in”, and short, cropped hair, à la Titus, was popular through 1810.

Fans made of ivory with silk, gauze, or lace were another important accessory for every occasion. Every young lady learned the “language of the fan” in order to convey social messages without having to be rude. There were different fans for different occasions, and some were jeweled and hand-painted.

As for jewelry, simple gold crosses expanded to jeweled necklaces, bracelets, tiaras, and even elaborate clasps on shawls and wraps. Silk parasols, often decorated with fringe, were required during outdoor activities in order to prevent the development of freckles. A reticule, or ridicule, was a small bag often made with fabric from a gown used for carrying coins and items formerly carried in pockets. 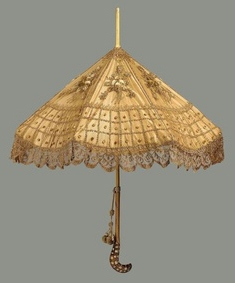 A lady’s maid or abigail was necessary for such things as caring for clothing, preparing baths, dressing (gowns usually fastened in the back), and doing hair. She also accompanied her mistress while shopping and walking; young, unmarried ladies were not allowed out without chaperones, at least not while in the city.

One of my favorite scenes in Regency stories is when the ladies go shopping. After having my own Regency gown and pelisse made for me this year (by my own very talented mother), I wasn’t all that keen on the frequent fittings. And not being able to get in and out of my gown without assistance. But I LOVE feeling like a princess when I wear it!

Of course, having a gown made this way is a great deal more complicated—and expensive—than buying one in a department store. But then, the dress you end up with is uniquely yours by the time you add the trim and embellishments—you’re not likely to ever see anyone else wearing it.

Would you ever consider having a period gown made up like this? Where would you wear it?

Click here to see photos of my Regency outfit.