This particular book is available at googlebooks for free in ebook form. Or you can buy a print version. 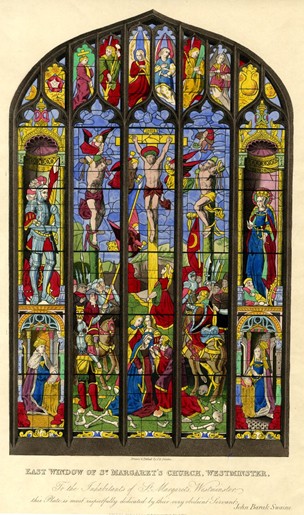 The history of the painted glass cinquecento Window, which, in 1758, was placed in the chancel, over the altar of St. Margaret’s Church, is truly romantic.

This beautiful window (said to have been executed at Gouda, in Holland, and to have occupied five years in the making) was originally intended by the magistrates of Dort as a present to Henry VII., by whom it was intended for his Chapel at Westminster; or as some say, it was ordered by Ferdinand and Isabella on the occasion of Prince Arthur being affianced, in 1499, to the Princess Catherine of Arragon, their portraits being procured for the purpose.

The three middle compartments represent the Crucifixion, with the usual accompaniments of angels receiving in a chalice the blood which drops from the wounds of the Saviour. Over the good thief an angel is represented wafting his soul to Paradise; and over the wicked, the devil in the shape of a dragon carrying his soul to a place of punishment. In the six upper compartments are six angels holding the emblems of crucifixion: the cross, the sponge, the crown of thorns, the hammer, the rods and nails. In the right hand lower compartment is Arthur, Prince of Wales (eldest son of Henry VII); and in the companion or left side, Catherine of Arragon, his bride (afterwards married to his brother Henry VIII., and divorced by him). Over the head of Prince Arthur is a full-length figure of St. George, with the red and white roses of England; and over Catherine of Arragon, a full-length figure of St. Catherine, with the bursting pomegranate, the emblem of the kingdom of Granada.

Prince Arthur died before the window was finished; the King himself before it could be erected. Succeeding events—the marriage of Henry VIII. To the bride or widow of his brother, with the subsequent divorce of Catherine—rendered the window wholly unfit for the place for which it was intended.

The window through the ages

“It is worth the walk”

It is worth a walk to St. Margaret’s to see this window. The late Mr. Winston, the great authority upon glass-painting, says of it: “Though at present much begrimed with London smoke and soot, it may be cited as an example of the pictorial excellence attainable in a glass-painting without any violation of the fundamental rules and conditions of the art. The harmonious arrangement of the coloring is worthy of attention. It is the most beautiful work in this respect that I am acquainted with.”

The church has been in our time, as it was centuries ago in Stow’s time, “in danger of pulling down;” which, if carried into effect, would add another leaf to the history of the St. Margaret’s Painted Window.

Thankfully, this last threat to the location of this window have not come to pass. I’m definitely putting St. Margaret’s on my list for this year’s trip, in August.