Holiday Bargains from the Bluestocking Belles

Holiday Bargains from the Bluestocking Belles. Got ’em all already? Buy one or three for a friend.

Available at your favorite retailer.

Check them out here! 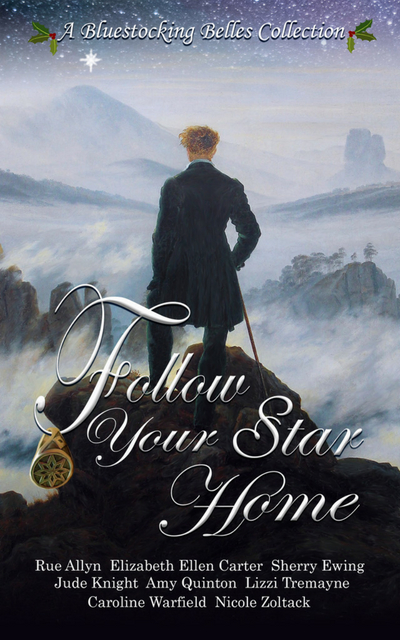 Divided sweethearts seek love and forgiveness in this collection of seasonal novellas.

In eight stories covering more than a thousand years, our heroes and heroines put this legend to the test. Watch the star work its magic as prodigals return home in the season of goodwill, uncertain of their welcome.

The Bluestocking Belles are proud to present eight never before published novellas in their latest Holiday collection. 25% of the royalties will be donated to the Malala Fund.

When Sonja stumbles upon fallen bodies littering her beach, she heals the lone survivor. After all, her late mother had been a healer.

Unbeknownst to Sonja, that survivor is none other than Anoundus. At one time, he ruled alongside his brother as co-kings of Sweden, but no longer. He has been banished.

What kind of life will he face here? What role will Sonja play? Can the two dare to find love this Yuletide?

James Winderfield yearns to end a long journey in the arms of his loving family. But his father’s agents offer the exiled prodigal forgiveness and a place in Society — if he abandons his foreign-born wife and children to return to England.

With her husband away, Mahzad faces revolt, invasion and betrayal in the mountain kingdom they built together. A queen without her king, she will not allow their dream and their family to be destroyed.

But the greatest threats to their marriage and their lives together is the widening distance between them. To win Paradise, they must face the truths in their hearts.

Things are heating up in the Scottish Highlands. When Robert refuses to become clan tacksman after his father, he is disowned and heads for the city to build a new life for himself and his beloved Sofia.

Sofia’s waiting turns to despair when her mother buys safety for herself and the remainder of the family during the clearance of their village—and leaves Sofia to the lusts of the laird’s degenerate son.

Rob emerges from the hell of Waterloo wanting only to see Sofia again…and his father.

But Sofia is dead, or isshe?

A Wish for All Seasons, by Rue Allyn

The last thing Caibre MacFearann wants is to return to Scotland let alone be forced to stay there. But the chance to rekindle the lost love of his youth is too tempting to resist.

Losing Caibre MacFearann’s love once hurt so much that Aisla MacKai wants nothing to do with him when a blizzard brings the man to her doorstep. Kindness and human charity require that she give him shelter, no matter that her poor heart had never mended.

From the Umbrella Chronicles: James and Annie’s Story, by Amy Quinton

His Grace, James Quill, will not be a bachelor-in-poor-standing for very much longer. For I, Lady Harriett Ross of the Infamous Umbrella, have avowed to orchestrate his betrothal to his former best friend, Miss Annie Merryweather, whether either of them wishes it.

Surprisingly, His Grace has agreed to my proposed 10-step plan.

Not-so-surprisingly, Her Soon-to-be-Grace is determined to resist the notorious prodigal son.

Will they find love and forgiveness this holiday season?

I’m just an old woman with opinions. On everything.

Love for Rosemarie Legrand gave Harry the will to go on during the horror of trench warfare. Now, army orders trap him in a camp awaiting repatriation. A bout of the Spanish flu lays him even lower, but he is determined not to leave without her. He’ll desert if he has to.

Rosemarie waits for word on her cousin’s farm where she took refuge when war reached the outskirts of Amiens. She wrote to tell him. Has he forgotten her? When the slimmest of information arrives, she sets out to find him.

Can these two lovers reunite before it is too late?

Helen Watson arranged a job for an out-of-work former soldier at her workplace, unaware that she’s the miracle Robert Fairmont needed.

Robert has returned from the Great War a new man with a new name. A job in his father’s factory is the first step toward reconciliation.

Can Helen forgive him for hiding his true or will Robert end up losing his father and his one true love?

All he needs is a fine chance.

One Last Kiss: The Knights of Berwyck, A Quest Through Timenovella, by Sherry Ewing

Banished from his homeland, Thomas of Clan Kincaid lives among distant relatives, reluctantly accepting he may never return home… Until an encounter with the castle’s healer tells him of a woman travelling across time—for him.

Dare he believe the impossible?

Jade Calloway is used to being alone, and as Christmas approaches, she’s skeptical when told she’ll embark on an extraordinary journey. How could a trip to San Francisco be anything but ordinary? But when a ring magically appears, and she sees a ghostly man in her dreams…

Dare she believe in the possible?

Thrust back in time, Jade encounters Thomas—her fantasy ghost. Talk about extraordinary. But as time works against them, they must learn to trust in miracles.

Can they accept impossible love before time interferes?