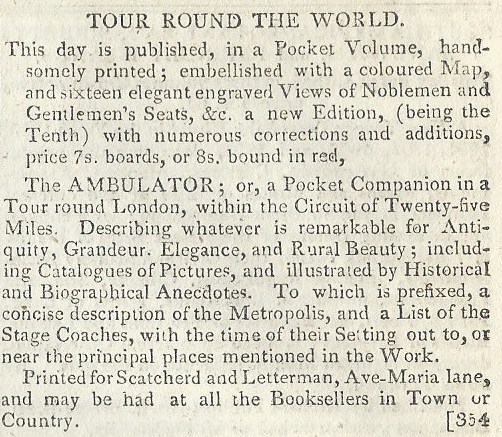 If you are interested in the historical details of towns around London, this book is worth acquiring, especially since it’s free on Google Books. 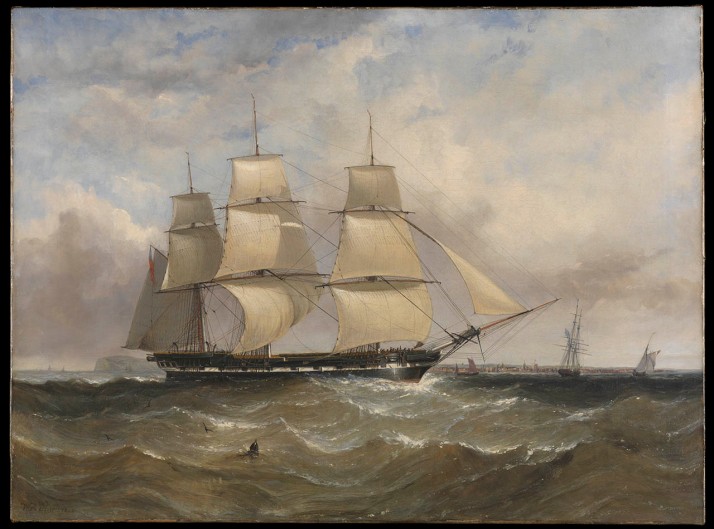 Mount Stewart Elphinstone’ with the cliffs of the English coastline in the distance. Figures are shown on deck looking towards the coast. Built of teak in India in 1826, the ‘Mount Stewart Elphinstone’ had a trading life of more than 50 years. Over several voyages she carried nearly 1,700 convicts to Sydney and Hobart, as well as emigrants to Australia. The ship took between three and five months to make each voyage and in 1849 was described by Sir Lucius O’Brien of County Clare as a ‘deplorable prison-ship’. The painting has been signed and dated by the artist ‘W. Knell 1840’.

A long four months’ voyage in a narrow space amid a crowd of strangers. I could not avoid believing that some of them must have become acquainted with the humiliating circumstances attending our departure; they never showed this, and the Captain, who had been an actor in the miserable scene, was the most delicate of all, apparently ignorant of all; yet in odd ways Mary and I fancied he was more interested in us than in any of the rest of his passengers. We had taken a dislike to the good little man; we had met him at a tea party… On board his ship no man could be quieter or more agreeable than Captain Henning. My father and mother were the principal people’ we had the best accommodation, and we formed a large party ourselves. My father and mother had one cabin, a poop cabin, Mary and I had the other, Isabella’s smaller one opened out of ours; opposite to hers was Mr Gardiner; the two deck cabins were occupied by my brother John and the captain. It was quite a home circle apart from every body else; they were all below on the main decks.

The first feeling that struck me was the absence of all fear; alone on those wide waters, with but a plank between our heads and death, the danger of our situation never occurred to me. There was such a sober certainty of life apparent in the regular routine observed; the early holy stoning, the early cleaning, manoeuvring, arranging, the regular bells, the busy crew, the busy cuddy servants, the regular meals, the walks upon the deck, the quiet preparation of all in the Cuddy*, of all in our cabins, as if we were to go on thus for ever, as if we had gone on thus for years past; all looked so usual that the terrours which assail the spirits of those on shore who watch the sea never once entered the heads of the most cowardly amongst us. Storms, rocks, fogs without, fires, leaks, want of care within, all so readily arranged before the timid ashore, never once started up in a single mind at sea.

On we sailed, those bright summer days, with hardly breeze enough to fill our sails, skimming leisurely over undulating rather than swelling waves, hardly aware that we were crossing the Bay of Biscay. With Fatima’s help our cabin was soon set in order. It was well filled; a sofa bed, a dressing table that closed over a washing apparatus, a writing table, a pianoforte, a bookcase, and a large trunk with trays in it, each tray containing a week’s supply of linen. In the locker was a good supply of extra stores, water well bottled, in particular. A swing tray and a swing lamp hung from the roof, and two small chairs filled corners; there was a pretty mat upon the floor, and no little room could look more comfortable. The whole locker end was one large window, closed till we left the colder latitudes, open ever after, and shaded by Venetians during the heat of the day. A small closet called a galley, in which Ayah kept her peculiar treasures, had a shower bath in it, readily filled by the sailors, and a most delightful and strengthening refreshment to us…

We soon learned to employ our days regularly, taught by the regularity round us. The life we led was monotonous, but far from being disagreeable, indeed after the first week it was pleasant; the quiet, the repose, the freedom from care, the delicious air, and a large party all in spirits, aided the bright sun in diffusing universal cheerfulness. Few were ill after the first weeks, the soreness of parting was over, a prosperous career was before the young, a return to friends, to business, and to pay awaited the elder; and we had left misery behind us and were entering on a new life free from trials that had been hard to bear.

… I occupied myself pretty much as at home, reading, writing, working, shading my charts, and making extracts from the books I read, a habit I had indulged for some years and found to be extremely useful, the memory was so strengthened by this means and the intellect expanded as thought always accompanied this exercise. We were all well supplied with books and lent them freely to one another. Captain Henning had a very good library, and with him and one or two others we could converse pleasantly.

So on we sped in our ‘gallant ship,’ the Mountstewart Elphinstone, 600 tons, built by Captain Henning his own self up at Surat, and a very slow sailer! he made her. As we proceeded under brightening skies we ourselves seemed to grow sunnier. We learned to vary our amusements too, I got on famously. The little Ceylon children were very nice, particularly the little girl; it was a pity to see them lose what they had been learning, so I made them come to me to school for 3 hours daily, Mary when she was well enough, helping to teach them; however, she soon gave herself something better to do… [O]ne of the Officers proposed to me to make a chart of the voyage with the ship’s course traced regularly and dated; it was very interesting getting on day by day, sometimes great long runs that carried by dots on ever so many degrees, and then a little shabby move hardly observable. Once in a calm, we went round in a circle for 3 or 4 days, quite annoyingly.

After crossing the equator we found a charming occupation—a map of the Southern sky. The constellations were so beautiful. We have no idea in these cloudy climates of the exquisite brilliancy of the cloudless ones, the size of the stars too. We marked each as it rose, often staying on the poop till actually ordered away. The Cross, Sirius, Aldebaran, never were such diamonds in a sky… 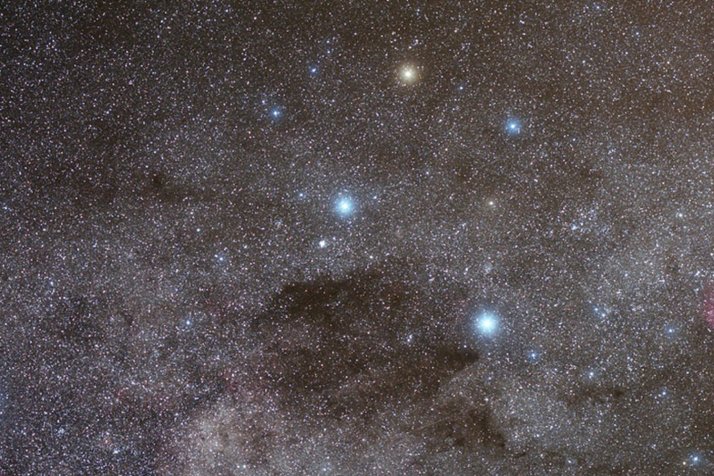 Besides these more private intellectual pursuits we had publick diversions. Mrs Morse played the harp well, Mr Lloyd sang; every Saturday night the captain gave us a supper; in return each guest spoke or sang, the worse the better fun, but we did our best.…

Another day was for the sailors; they danced and they sang, and did athletick exercises, ending with a supper. Mrs Morse gave a Concert once a week down below in her range of cabins, and my Mother, opening our 4 en suite, gave another. Then we played cards in the Cuddy. Every body inclining to be agreeable, amusement was easily managed.

The Cadets killed a shark, and the Doctor dissected the head, giving quite a pretty lecture on the Eye. A nautilus, too, came under his knife, and a dolphin, and flying fish and sucking fish. One day I had been doing my map in the Cuddy, and wanting some pencil or something, went into our cabin; the locker Venetians were all open, and there before me, resting on the water beyond, was an albatross, surrounded by her young. Such a beautiful sight. That ‘Ancient Mariner’ committed a dreadful crime. Another day a storm at a distance revealed to us as it ended a waterspout, which, had it broken on us, would have been our end. It was in hour glass form, spouting up very high.

We had stormy weather near the Cape, bitterly cold; all the thick wraps we were provided with were insufficient to keep us comfortable. One really wild day I had myself lashed to the campanion that I might take a steadier survey of the sea ‘mountains high.’ The weaves rose to the mast head, apparently; we were up on top of them one minute, down in such a hollow the next, the spray falling heavy on the deck.

We landed on the 8th of February 1828 in Bombay. We entered that most magnificent harbour at sunset, a circular basin of enormous size, filled with islands, high, rocky, wooded, surrounded by a range of mountains beautifully irregular; and to the north on the low shore spread the City, protected by the Fort, screened by half the shipping of the world. We were standing on the deck. ‘If this be exile,’ said my father musingly, ‘it is splendid exile.’ ‘Who are those bowing men?’ said my mother, touching his arm and pointing to a group of natives with Couloured high crowned caps on some heads, and small red turbans on others, all in white dresses, and all with shoeless feet, who had approached us with extraordinary deference. On of the high caps held out a letter. It was from Uncle Edward, my Mother’s younger brother… and these were his servants come to conduct us to his country house.

*The Cuddy was the public room, where the passengers sat and ate ; and cuddy servants were those who waited at table.

Memoirs of a Highland Lady 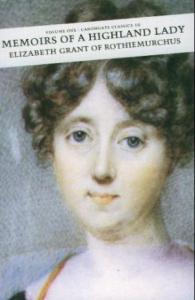 ‘I was born on the 7th May 1797 of a Sunday evening at No. 5 N. side of Charlotte Square, Edinburgh, in my father’s own lately built house and I am the eldest of five children he and my mother raised to maturity.’ Thus opens one of the most famous set of memoirs ever written. Since its first bowdlerised edition in 1898, they have been consistently in print. This is the first ever complete text. Written between 1845 and 1854 the memoirs were originally intended simply for Elizabeth’s family, but these vivid and inimitable records of life in the early 19th century, and above all on the great Rothiemurchus estate, full of sharp observation and wit, form an unforgettable picture of her time. The story ends with the thirty-three-year-old Elizabeth finding her own future happiness in marriage to an Irish landowner, Colonel Smith of Baltiboys. ‘A masterpiece of historical and personal recall.’ Scotsman

Memoirs of a Highland Lady