The following post is the twelfth of a series based on information obtained from a fascinating book Susana recently obtained for research purposes. Coaching Days & Coaching Ways by W. Outram Tristram, first published in 1888, is chock full of commentary about travel and roads and social history told in an entertaining manner, along with a great many fabulous illustrations. A great find for anyone seriously interested in English history!

The Brighton Road, Mr. Tristram suggests, might be called the “Regent’s Road,” since it was the Prince who, once he determined the health benefits of the seaside city, saw to it that the road was made passable.

For before the Pavilion was, Brighton was about as easy to get at as the Cranmere Pool in the middle of Dartmoor, the moon, the North Pole, the special exits in case of fire at our principal theatres, or anything else on earth totally inaccessible.

It was in 1750 when Brighton was nothing but a small fishing village that Doctor Richard Russell visited and proclaimed that sea water was beneficial to health, which began the exodus of wealthy hypochondriacs to seaside resorts. At that time, however, our author suggests that oxen were required to cope with the deep ruts. “People got into coaches to go to Brighton and only got out of them when they were overturned.”

All these horrors of the Brighton Road the much abused George the Fourth did away, with a sweep as it were of his fat, bejewelled and august hand! He built the Pavilion, and people from all parts of the country came straightway to see it and him… the crowds soon found…that if they were to come to Brighton, and to court, they had better have some decent road to come upon. And from this simple bringing home of a plain truth came into existence the Brighton Road—“perhaps the most nearly perfect, and certainly the most fashionable of all.”

This sixteenth century manor is known for its ghost, said to be that of Anne Sergison, who, already afflicted with a somewhat combative nature, had to fight a long and sordid court battle to get it. It came to light after her brother’s death that the thirteen-year-old girl assumed to be his daughter was actually a “supposititious” (don’t you just love that word?) child imposed on him by his wife. No one knows what happened to the girl and her mother, but Anne’s ghost has been spotted in the corridors and the avenue leading to the house, and some say she particularly attended her granddaughter’s wedding in 1890. No rest for the wicked, so they say.

All distinguished travellers on the Brighton Road pulled up as a matter of course at the Dorset Arms. Amongst those whose names have been handed down as habitual visitors, was Lord Liverpool, who always stayed at the Dorset Arms when on his way to visit the Harcourt seat near Buxted… Another constant guest was Lord Seymour, who died, I believe, in 1837—mean, I am sorry to say…and yet not mean either one way, for if he didn’t eat and drink much, he possessed a passion for illumination which must have produced some respectable items in the bill—thirty wax candles or more burning in his bedroom all night. Spencer Perceval too (the Prime Minister remarkable for great ability and for having been shot in the lobby of the House of Commons in 1812 by John Bellingham) must have been a familiar figure at the Dorset Arms, for the house from which he was married in 1790 to Miss Jane Wilson stands just at the bottom of the Dorset Arms’ garden.

It is said the that in 1815 the Regent, the Tsar of Russia, and many royal visitors stayed at the inn on their way to Blindley Heath, to be present at the fight for the championship of England…Blindley Heath was one of the most popular and celebrated of prize-fighting rendezvous.

“The Fancy were all upon the alert soon after breakfast” (I quote from Boxiana’s description of the Grand Pugilistic combat between Randall and Martin, at Crawley Down, thirty miles from London, on Tuesday, May 4, 1819 “on the Monday to ascertain the seat of action; and as soon as the important whisper had gone forth, that Crawley Down was likely to be the place, the toddlers were off in a twinkling… Between the hours of two and three o’clock in the afternoon upwards of a hundred gigs were counted passing through Croydon… Long before eight o’clock in the evening every bed belonging to the inns and public houses in Godstone, East Grinstead, Reigate, Bletchingley, &c., were doubly and some trebly occupied.”

“Those persons whose blunt enabled them to procure beds, could not obtain any sleep, for carriages of every description were passing through the above towns all night… The brilliants also left Brighton and Worthing at about the same period, and thus were the roads thronged in every direction… It is supposed if the carriages had all been placed in one line they would have reached from London to Crawley. The amateurs were of the highest distinction, and several noblemen and foreigners of rank were upon the ground.”

Regent and emperor putting up at a wayside inn to witness a fight for the championship!…The noblemen and foreigners of rank crowding round the twenty-four foot ring! What can give us a better idea of the Brighton Road in its prime than these facts? What paint more vividly what I call its “Regency flavour”, its slang, its coarseness, its virility—in a word, its “Corinthianism”? 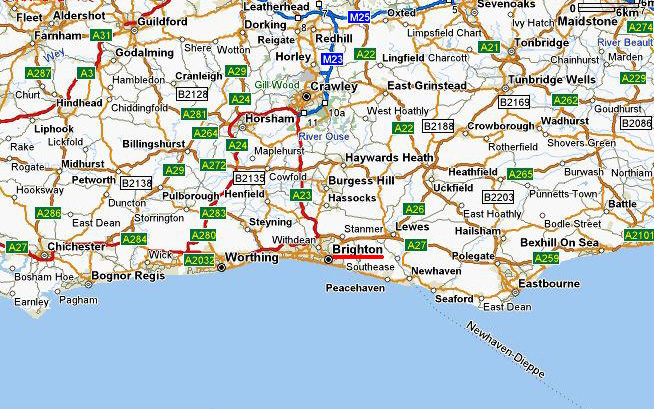 True Regency gentlemen did not sully their hands with work—that was for the lower classes. An exception to that rule would be managing his estates. Although he would generally have an estate manager or steward to handle the day-to-day tasks, the supervision of that employee would fall to him.

If all was in order, however, the Regency gentleman was fortunate to possess a considerable amount of free time, particularly the younger generation whose fathers yet survived, leaving them at liberty to seek their own pleasures, often referred to as attaining one’s “Town bronze.”

A previous post touched on the gentlemen’s clubs and gaming hells. Drinking, gambling and wenching were all popular pastimes for the gentlemen with time on their hands, especially for the young “cubs” or “greenhorns” who had yet to learn to be wary of pitfalls, such as “Captain Sharps” out to relieve them of their money by nefarious means. But when they weren’t indulging in the Regency era’s form of “partying,” they would likely engage in sporting events.

A true gentleman had to be “good with his fists,” so many a gentleman frequented such pugilistic clubs as Gentleman Jackson’s on Bond Street, the Daffy Club, Limmer’s Hotel, Offley’s, and the Puglistic Society.

Gentleman Jackson was a former champion who enjoyed the respect and admiration of English society. His boxing academy on Number 13 Bond Street was a popular location for gentlemen who wished to improve their pugilistic skills. Jackson was instrumental in organizing the Pugilistic Society, which was formed at Thatched House Tavern in May 1814. The Pugilistic Society had the effect of lending respectability to the sport.

Offley’s was a sporting hotel in Henrietta Street that was known for its excellent beefsteak and ale. The Daffy Club, originally held at the Castle Tavern in Holborn, was an informal club reputed for the quantities of “blue ruin” (homemade gin).

Prize fights or “mills” were usually held just outside of cities and towns where organizers could avoid the many laws regulating the sport. As soon as a fight was announced, hordes would swarm the town well in advance in order to secure accommodations. Those who arrived after every public house and inn was occupied either had to try to sleep in their carriages amidst all the racket in the street or stay up all night.

In 1755, an Italian riding and fencing master by the name of Dominico Angelo Malevolti Tremamondo came to London and earned a reputation for extraordinary fencing skills. He opened “Angelo’s School of Arms,” first at Carlisle House, and then the Opera House Buildings in Haymarket. Angelo’s was a popular place for gentlemen to socialize, watch exhibitions of master fencers, and perfect their own equestrian and fencing skills. Angelo’s son Henry took over operations in 1785, and in 1817, he turned it over to his own son, also Henry. The elder Henry played a pivotal role in assisting his friend Gentleman Jackson establish his own boxing salon. 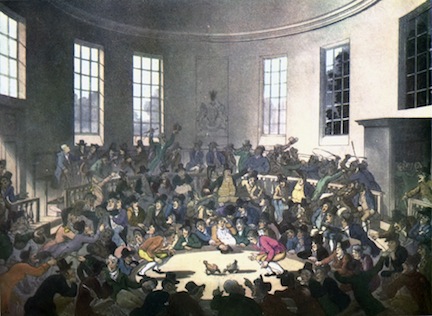 Of all the violent animal sports—which included bear baiting and bull baiting—cock fighting was by far the most popular. The Birdcage Walk and the Royal Cockpit were two of the special indoor arenas where crowds gathered to gamble on the outcomes and watch the fights. The birds were armed with sharp spurs and the cruelty and violence was extreme. (No hero of mine will ever enjoy this sport, I assure you!)

The Regency Gentleman: His Upbringing

The Rise and Fall of Beau Brummell

Gentlemen’s Sports in the Regency

The Gentleman’s Passion for Horses

Riding to the Hounds

The Regency Gentleman’s Passion for the Turf