The following post is the ninth of a series based on information obtained from a fascinating book Susana recently obtained for research purposes. Coaching Days & Coaching Ways by W. Outram Tristram, first published in 1888, is chock full of commentary about travel and roads and social history told in an entertaining manner, along with a great many fabulous illustrations. A great find for anyone seriously interested in English history! 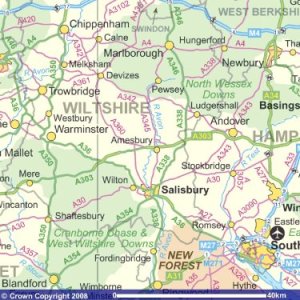 The Telegraph, rival of the Quicksilver which our author repeatedly states can do 175 miles in eighteen hours, used to pass through Weyhill, which was famous for its annual fair, “which would make those people who have never seen one stare.”

This festivity, which is indeed quite an un-English and out-of-the-way sight, begins on October 10th (Michaelmas Eve) and goes on for six days, during which all the country-side seems to have broken loose, and high junketings are to be seen. Besides junketings (which prevail chiefly on the last day of the fair in connection with peep-shows of the most blood-curdling description, whirligigs, merry-go-rounds, rifle galleries, and gingerbread) are also to be seen wonderful shows of sheep, magnificent cheeses, the finest hops in England displayed in the Farnham Row, great exhibits of machinery and enormous carthorses, and, enveloping all, a Babel indescribable.

Amesbury and the Abbey

Amesbury is where Guinevere arrived “somewhat late at night, after a ride across the Plain” after her affair with Lancelot was discovered.

“…hither came Queen Elfrida in 980…after her murder of her stepson Edward at Corfe; and, bent like all medieval murderesses suffering from a temporary mental depression, on building a church. When she came to the point however, and had interviewed the architect and the abbot, she went the whole hog and built an abbey.”

Prior to Henry VIII’s dissolution, the abbey played host, when “the Exeter road at that time was but a medieval cart-track, and a very bad one too,” to Eleanor of Brittany, sister of Prince Arthur and Mary, sixth daughter of Edward I. “Eleanor, Queen of Henry III, died here, and Katharine of Aragon stayed for a while here on her first arrival in England in 1501.”

Following the dissolution, “the abbey of Amesbury became Amesbury Abbey and passed from the Earl of Somerset, to whom it was granted by Henry VIII, into the respective hands of the Aylesburys, Boyles, and Queensberrys…”

The Abbey eventually became the parish church, and the nearby mansion of the same name built by Inigo Jones is now part of a group by the same name that operates nursing and retirement homes in the area. 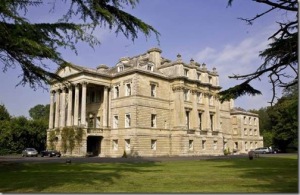 This is where Kitty, “the charming Duchess of Queensberry played the Lady Bountiful in the place, and by entertaining Prior and Gay the Abbey graced the quaint old Wiltshire town with the memories of two of the not least celebrated of the English humorists.”

The Duchess of Queensberry

According to the Douglas family history, Catherine Douglas, née Hyde, was an outspoken, rather eccentric woman who “loved walking, avoided alcohol and was an enthusiastic planter of trees at her husband’s estates.” She’d grown up “in a household frequented by literary celebrities,” and it was she about whom Prior wrote the poem “The Female Phaeton: Upon Lady Kitty’s First Appearing in Public” when she was sixteen.

Following her marriage to Charles Douglas, 3rd duke of Queensberry, the acclaimed beauty Kitty became an avid patron of the arts, to the point of being exiled from court when her defense of the playwright John Gay offended King George II. Gay spent the last years of his life at the Abbey, where he wrote the Beggar’s Opera, and was given a lavish funeral at his death in 1732.

The Douglas family history fails to mention the fascinating story of Julius Soubise, a Negro slave from the West Indies who was given to the duchess in 1764 when he was ten years old. She gave him a privileged life, treating him as her own son, and he became a noted fencing and riding master, a member of the most exclusive clubs, and quite popular among upper-class social circles. A violinist and singer, he trained in oratory with the actor David Garrick. At times he claimed to be African royalty, calling himself “Prince Ana-Ana-maboe” or the “Black Prince.” It was rumored that the duchess and her protégé had a sexual relationship, so perhaps that is the reason Soubise was left out of the family history. Is it only coincidence that the duchess died two days after Soubise sailed for India?

One reason I love delving into these family histories is the interesting things you find. The 3rd Duke of Queensberry, it turns out, succeeded his father “due to special remainder,” when his older brother James was declared insane. Both of the 3rd duke’s sons predeceased him and the title passed to a distant cousin, William Douglas, who later became a friend of the Prince of Wales.

The Duchess of Queensberry Rules

Actually, it was the 9th Marquess of Queensberry to whom the  1867 code on which modern boxing is based can be attributed (although he was not the author, merely the endorser). This code, meant for both amateur and professional matches, is and was the first to mention the use of gloves for boxing. The dear duchess had nothing to do with it, having passed on ninety years earlier.

The Banqueting House on Whitehall Street is the only remaining building of the Palace of Whitehall, which was the primary residence of English monarchs for much of the 17th century. In its day, it was the largest palace in Europe, eclipsing even Versailles and the Vatican with its 1500 rooms. Henry VIII married Anne Boleyn and Jane Seymour there (in 1533 and 1536), and it was there where he died in 1547. 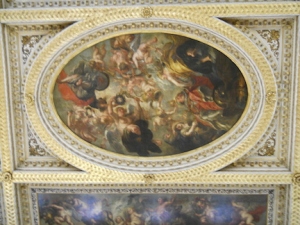 In 1622 James I commissioned Inigo Jones to redesign the Banqueting Room, and Charles I was responsible for adding the beautiful ceiling with paintings by Rubens. These paintings, designed to reinforce Charles I’s belief in the divine right of kings, were completed in Antwerp and rolled up for transportation to England, where they were painstakingly laid out and attached to coffers in the ceiling.

Prior to the addition the ceilings, the room was often used for elaborate masques and pageants. Afterward, it was determined that the smoke from the bright lights would damage the ceiling, and it was used primarily for official functions.

It was across this floor that Charles I walked one final time before meeting his fate on the scaffold constructed outside. (So much for the divine right kings.)

For some reason, Cromwell chose not to destroy the building as he did so many other buildings symbolic of royal preference. Perhaps because he decided to use it for his own state functions.

Fires in 1691 and 1698 destroyed nearly all the Whitehall Palace buildings, except for this one, probably because Sir Christopher Wren, the reigning architect of the day, had the building next to it blown up to prevent the fire from spreading to the Banqueting House.

While it’s only a single room, it’s definitely something not to be missed. The audio guide that comes with your admission fee is excellent, there are lots of chairs and benches where you sit and gaze at the room while listening, and if you’re very fortunate, you can grab one of the beanbags on the floor and lie prone while admiring the lovely ceiling. When I was there on a Saturday, there weren’t a lot of people there—while I expect everywhere else in Westminster was teeming with crowds as usual—and I could lie there and contemplate the historical and artistic significance of the room in peace. 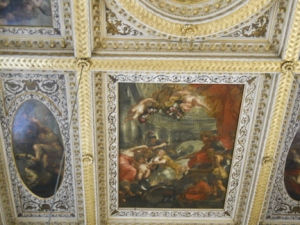 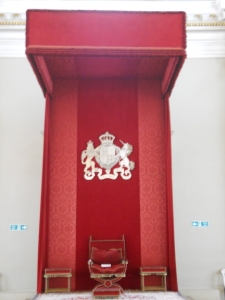