The following post is the tenth of a series based on information obtained from a fascinating book Susana recently obtained for research purposes. Coaching Days & Coaching Ways by W. Outram Tristram, first published in 1888, is chock full of commentary about travel and roads and social history told in an entertaining manner, along with a great many fabulous illustrations. A great find for anyone seriously interested in English history!

A = Stonehenge, B = Sedgemoor

Mr. Outram declines to say much about Stonehenge

because everybody has written about it, and most people have read what has been written. If anybody however has not seen it, should chance to be in the neighbourhood I would advise them (without troubling themselves much beforehand as to whether it is Druidical, or post Roman, or built by the Belgae) to approach it from Amesbury about sunset, when they will see what they will see, and return home—or I am in error—well-pleased with what they have seen.

The Woodyates Inn and the Taking of Monmouth

James Scott, Duke of Monmouth was the illegitimate son of Charles II and his mistress, Lucy Walter. There were rumors of a marriage between the two, which would have made the duke heir to the throne, but Charles II himself maintained that his only wife was the queen, Catherine of Braganza. Unfortunately, he and Catherine never had any children, so when he died, the throne passed to his brother, who became James II. 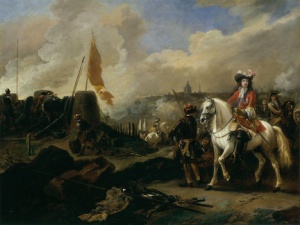 James had Catholic leanings and was married to a Catholic wife, and  this caused a great deal of unrest. Few people wanted to see the sort of bloody inquisition that occurred in the reign of Mary I. Monmouth was good-looking and as charming as his father and decidedly Protestant, so there were many who preferred to believe that he was the true heir, as he did himself, declaring on multiple occasions that he was the true King and even undergoing a coronation of sorts.

It was not to be, however. Monmouth’s forces were defeated by King James II’s armies on the

bleak plain of Sedgemoor, and crushed for ever the daring hopes of the brilliant young nobleman who was for so long the darling of the West. The memory of Monmouth is still preserved about Woodyates. It was close to the Woodyates Inn that the giving in of the desperately ridden horses stopped the flight of Monmouth, Grey, and Buyse to the sea. Here the fugitives turned their horses loose, concealed the bridles and saddles, disguised themselves as rustics, and made their way on foot towards the New Forest; and quite close by they fell into the hands of James’s troopers. Monmouth himself was taken on the Woodlands Estate near Horton, his captors failing for some moments to recognise in the gaunt figure, crouching in a ditch, dressed like a shepherd, with a beard of three days’ growth, already prematurely grey, the once brilliant and graceful son of Charles II and Lucy Walters. 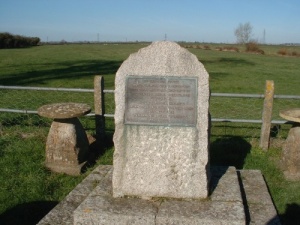 Monument of the Battle of Sedgemoor

Dorchester and the Bloody Assize of Judge Jeffreys 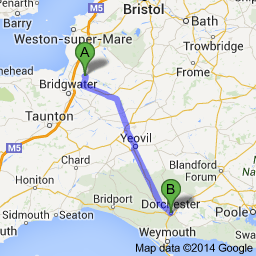 A = Sedgemoor, B = Dorchester

Although he begged forgiveness of his uncle and converted to Catholicism, the wayward Monmouth was executed for treason at Tower Hill. The disposition of his followers is described below.

“The court, writes Macaulay, “was hung, by order of the chief justice, with scarlet, and this innovation, seemed to the multitude to indicate a bloody purpose. It was also rumoured that when the clergyman who preached the assize sermon enforced the duty of mercy, the ferocious countenance of the judge was distorted by an ominous grin. These things made men augur ill of what was to follow.

“More than three hundred prisoners were to be tried. The work seemed heavy, but Jeffreys had a contrivance for making it light. He let it be understood that the only chance of obtaining pardon or respite was to plead guilty. Twenty-nine persons who put themselves on their country and were convicted were ordered to be tied up without delay. The remaining prisoners pleaded guilty by scores. Two hundred and ninety-two received sentence of death.”

With the birth of a son from his Catholic wife in 1688, the unrest about a Catholic heir increased, and James was deposed, to be replaced by his daughter from his first wife, Mary II, and her husband, William III.