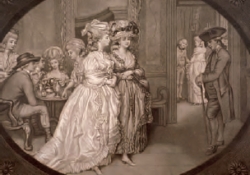 Teresa, by birth a German, and during man-years a public singer in Italy and Germany, settled in London about the year 1756, and for twenty years entertained “the votaries of fashion of both sexes” with great success. For this purpose Mrs. Cornelys obtained possession of Carlisle House, in Soho Square, formerly the mansion of the Earl of Carlisle.

Carlisle House was of considerable extent: the Catholic chapel in Sutton Street was the banqueting-room, and the connecting passage between it and the house in Soho Square was called “the Chinese Bridge.” The arched entrance below the chapel was exclusively for chairs or sedans.

The Antecedent of Almack’s?

The nobility and gentry had the entrée of Carlisle House by payment of an annual subscription, for which they received a ticket of admission to all entertainments given there. They had the privilege of lending their tickets to friends, provided they wrote “the name of the person upon the back of the said ticket to whom they have lent it, to prevent any mistake.” Mrs. Cornelys had great success; but she had her troubles in powerful competitors; for we find her issuing this advertisement: “Whereas, it is been industriously reported, to the disadvantage of Mrs. Cornelys, that she has expressed herself dissatisfied with a subscription now on foot to build a large room in opposition to her; she esteems it her duty, in this public manner, to declare that she never once entertained a thought so unjust and unreasonable…” The “large room” here referred to in opposition is thus referred to by Horace Walpole, in a letter dated Dec. 16, 1764: “Mrs. Cornelys, apprehending the future assembly at Almack’s, has enlarged her vast room, and hung it with blue satin, and other with yellow satin; but Almack’s room, which is to be 90 feet long, proposes to swallow up both hers, as easily as Moses’s rod gobbled down those of the magician’s.” However, Mrs. Cornelys made additions to Carlisle House, with new embellishments, furniture, and decorations, which in the year 1765 cost some 2,000l… in consequence of which she was compelled to charge subscribers an additional guinea. 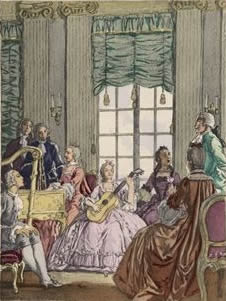 A musical evening at Carlisle House

…Mrs. Cornelys gave a magnificent fête to some 800 maskers. Walpole devotes great part of a long letter to a description of this masquerade, at which he was present.

Our civil war has been lulled asleep by a Subscription Masquerade, for which the House of Commons literally adjourned yesterday. Instead of Fairfax’s and Cromwells, we have had a crowd of Henry the Eighths, Wolseys, Vandykes, and Harlequins; and because Wilkes was not mask enough, we had a man dressed like him, with a visor in imitation of his squint, and a Cap of Liberty on a pole… The ball was last night at Soho; and, if possible, was more magnificent than the King of Denmark’s…

…The mob was beyond all belief: they held flambeaux to the windows of every coach and demanded to have the masks pulled off and put on at their pleasure, but with extreme good humor and civility. I was with my Lady Hertford and two of her daughters in her coach: the mob took me for Lord Hertford, and huzzaed and blessed me! One fellow cried out, “Are you for Wilkes?” Another said, “D—n you, you fool, what has Wilkes to do with a masquerade?”

Among the company were Lady Waldegrave, Lady Pembroke, the Duchess of Hamilton, Mrs. Crewe, Mrs. Hodges, Lady Algeria Carpenter, &c. The characters assumed were very eccentric. Sir R. Phillips appeared as “a double man,” half-miller, half chimney-sweeper. The Earl of Carlisle figured as a running footman; Mr. James, the painter, as Midas. The Duke of Devonshire was “very fine, but in no particular character.” And “Lord Edg—b, in the character of an old woman, was full as lovely as his lady.” The ladies were superbly dressed. “The Countess Dowager of Waldegrave wore a dress richly trimmed with beads and pearls, in the character of Jane Shore.” “The Duchess of Bolton, in the character of Diana, was captivating.” “Lady Stanhope, as Melpomene, was a striking fine figure.” “Lady August Stuart, as a Vestal, and Lady Caroline as a Fille de Patmos, showed that true elegance may be expressed without gold and diamonds.” “The Countess of Pomfret, in the character of a Greek Sultana, and the two Miss Fredericks, who accompanied her, as Greek slaves, made a complete group;” and to eclipse all, “Miss Moncton, daughter to Lord Galway, appeared in the character of an Indian Sultana, in a robe of cloth of gold and a rich veil. The seams of her habit were embroidered with precious stones, and she had a magnificent cluster of diamonds on her head: the jewels she wore were valued at 30,000l.”

The Bigamous Duchess of Kingston

An “opera strife” leads to bankruptcy

In the following year, 1771, Mrs. Cornelys got embroiled in an opera strife. Walpole writes, Feb. 22, 1771: “Our most serious war is between two Operas. Mr. Hobart, Lord Buckingham’s brother, is manager of the Haymarket. Last year he affronted Guadagni, by preferring the Zamperina, his own mistress, to the singing hero’s sister. The Duchess of Northumberland, Lady Harrington, and some of the great ladies, took up the brother, and without a license erected an opera for him at Madame Cornelys’s… Mr. Hobart began to starve, and the managers of the theatre were alarmed. To avoid the Act, she pretended to take no money, and had the assurance to advertise that the subscription was to provide coals for the poor, for she has vehemently courted the mob, and succeed in gaining their princely favour. She then declared her masquerades were for the benefit of commerce.… At last, Mr. Hobart informed against her, and the Bench of Justices, have pronounced against her. Her opera is quashed, and Guadagni… is not only fined, but was threatened to be sent to Bridewell.

Mrs. Cornelys’s masquerades were characterized not only by indecency, but also by mockery of solemn feelings and principles… The lessees of the theatre, injured by her popularity, opposed her; and she was convicted before Sir John Fielding for performing dramatic entertainments without a license.… Next, bills of indictment were preferred to the grand jury, insinuating of Mrs. Cornelys “that she does keep and maintain a common disorderly house, and did permit and suffer diverse loose, idle, and disorderly persons, as well men as women, to be and remain the whole night, rioting and otherwise misbehaving themselves.” In November following, appeared in the bankrupt list of the London Gazette, “Teresa Cornelys, Carlisle House, St. Anne, Soho, dealer.” 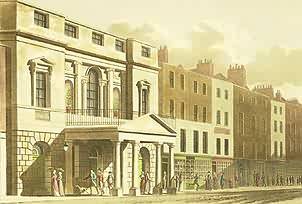 The Pantheon, one of the competitors of Mrs. Cornelys’s that eventually caused her downfall

…Mrs. Cornelys attempted to retrieve her fortunes in various places; one being in a large detached mansion, known as Knightsbridge Grove, in Porter’s Lane, approached through a fine avenue of trees from the highway. At length, in 1785, Mrs. Cornelys gave up her precarious trade. “Ten years after,” says Davis’s Memorials of Knightsbridge, “to the great surprise of the public, she reappeared at Knightsbridge as Mrs. Smith, a retailer of asses’ milk. A suite of breakfast-rooms was opened; but her former influence could not be recovered.” The speculation failed; and at length she was confined in the Fleet Prison, where she died August 19, 1797.

In the literature of the day

Murphy, in his Epilogue to Zobeide, 1771, refers to her popularity:

For her each haunt that charms a modern belle!

Combe, in his satire, The Diobalady, 1777, thus severely castigates the licentiousness of the amusements:

The ready ministers of hell’s commands, Obedient, fly and take their several stands

At Court,  Cornelys’, and the Coterie;

Where vice, more vicious by effrontery,

Of God and man, to aid the devil’s cause.

Note: Teresa Cornelys was one of the mistresses of the famous lover, Casanova, to whom she bore a child.