A Place in Time

When you turn the last page and close the book, what sticks with you? An intriguing character? A shocking plot twist?

What about the setting?

I’m a firm believer that historical romance should capture a place in time, or else it’s not really historical romance. Whether it’s Victorian London or Tang Dynasty China, a story’s setting, when done well, shapes everything the characters—and readers—experience.

For my Runaway Desires series, I chose the late Georgian period, specifically the 1790s, because I knew that tumultuous decade would offer plenty of built-in tension and conflict, including political and economic uncertainties, war, and the fight to end slavery. It’s a slightly edgier cousin of the much-beloved Regency period. It’s also when Jane Austen’s first three novels were written (and arguably set).

In To Kiss a Thief, the first book in the series, the heroine, Sarah, is suspected of infidelity and involvement in the disappearance of a priceless sapphire necklace. Rather than face the scandal, she runs away. Three years later, her husband finds her on the northern coast of Devonshire and wonders why on earth Sarah had chosen such a place to hide away… She would almost certainly have been better able to disappear in London, where one could very nearly get away with anything under cover of anonymity. But in a fishing village of a few hundred souls, her arrival would have been remarked by all.

And it has. From the baker to the apothecary’s wife, everyone in Haverhythe has an opinion about Sarah. At heart, To Kiss a Thief is a small-town romance, and as my hero and heroine reconnect with one another, they are confronted and comforted by the members of this close-knit community.

Because I wanted the place and its people to leap off the page, I was determined to ground my fictional village in reality. I chose the general location of Britain’s West Country for its proximity to Bristol, where Sarah’s parents live. I wanted the temptation to go home to be always on her horizon—literally. Then, one evening, as I idly scanned that coastal region via Google Earth looking for inspiration, I stumbled upon Clovelly. 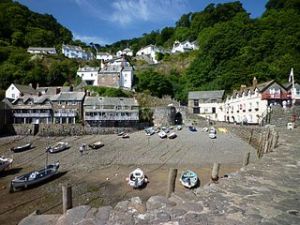 From its appearance in the Domesday Book to the present day, Clovelly has enjoyed a long and interesting history. The picturesque village of fewer than 500 people has been a popular tourist destination since the Victorian period, thanks in part to one of its most famous residents, novelist Charles Kingsley. It is privately owned, and has belonged to just three different families since the thirteenth century.

I made use of several of Clovelly’s distinctive elements in constructing the fictional Haverhythe. One is its unique geography. Built into a cliff overlooking the Bristol Channel, the village consists primarily of a single, cottage-lined street that descends some 400 feet to the water. In the harbor lies another striking feature: a massive stone quay, built in in the fourteenth century. Once the ships’ cargo has been offloaded, it is transported overland via sledges drawn by donkeys.

In To Kiss a Thief, characters travel the steep main street of Haverhythe under the watchful eye of all the village. Gossip travels “up-along” and “down-along” more quickly than the donkeys. And several memorable moments for my hero and heroine take place on the quay that curls into the harbor.

Unfortunately, I haven’t yet had the pleasure of visiting Clovelly in person. But I’ve never visited the late eighteenth century, either. Like most writers of historical fiction, I find extensive research essential to crafting the best stories I can. I read about Clovelly’s history and geography, pored over the treasure trove of pictures online, and combined that information with my own experience of another coastal town, Tenby (Wales), to create my heroine’s perfectly imperfect hiding spot.

Travel, even in the pages of a book, makes us richer. Wherever your next reading adventure takes you, I hope you enjoy your visit!

What’s the most memorable setting of a book you’ve read? Or what’s your favorite real-life travel destination? One person will be chosen at random from the comments on this post to receive an e-book of To Kiss a Thief. The giveaway ends at midnight on August 21st.

About To Kiss a Thief 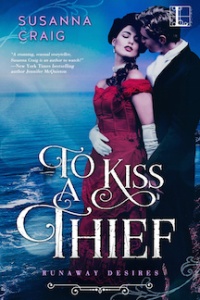 In the first book of a captivating new series set in Georgian England, a disgraced woman hides from her marriage—for better or worse…

Sarah Pevensey had hoped her arranged marriage to St. John Sutliffe, Viscount Fairfax, could become something more. But almost before it began, it ended in a scandal that shocked London society. Accused of being a jewel thief, Sarah fled to a small fishing village to rebuild her life.

The last time St. John saw his new wife, she was nestled in the lap of a soldier, disheveled, and no longer in possession of his family’s heirloom sapphire necklace. Now, three years later, he has located Sarah and is determined she pay for her crimes. But the woman he finds is far from what he expected. Humble and hardworking, Sarah has nothing to hide from her husband—or so it appears. Yet as he attempts to woo her to uncover her secrets, St. John soon realizes that if he’s not careful, she’ll steal his heart… 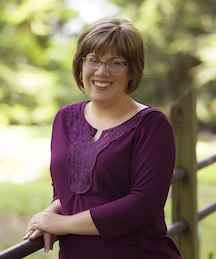 A love affair with historical romances led Susanna Craig to a degree (okay, three degrees) in literature and a career as an English professor. When she’s not teaching or writing academic essays about Jane Austen and her contemporaries, she enjoys putting her fascination with words and knowledge of the period to better use: writing Regency-era romances she hopes readers will find both smart and sexy. She makes her home among the rolling hills of Kentucky horse country, along with her historian husband, their unstoppable little girl, and a genuinely grumpy cat.