Falsely accused of murder and mute from a near-fatal beating, Apollo Greaves, Viscount Kilbourne has escaped from Bedlam. With the Crown’s soldiers at his heels, he finds refuge in the ruins of a pleasure garden, toiling as a simple gardener. But when a vivacious young woman moves in, he’s quickly driven to distraction . . .

London’s premier actress, Lily Stump, is down on her luck when she’s forced to move into a scorched theater with her maid and small son. But she and her tiny family aren’t the only inhabitants—a silent, hulking beast of a man also calls the charred ruins home. Yet when she catches him reading her plays, Lily realizes there’s more to this man than meets the eye.

OUT OF ASHES, DESIRE FLARES

Though a scorching passion draws them together, Apollo knows that Lily is keeping secrets. When his past catches up with him, he’s forced to make a choice: his love for Lily…or the explosive truth that will set him free. 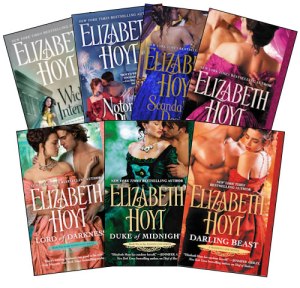 Elizabeth was born in New Orleans but grew up in St. Paul, Minnesota. She was fortunate to be able to travel extensively as a child, visiting St. Andrews, Scotland; Germany; France; and Belgium. She spent a year in Oxford, England and was a summer exchange student to Kawasaki, Japan.

Elizabeth has a BA in anthropology from the University of Wisconsin at Madison and, as a result of having no clue what to do with her life thereafter, a career history as a barista, a (terrible) sales clerk, a Wisconsin Revenue Service data entry slave, and an archeological field work grunt. Fortunately, Elizabeth married relatively young and produced two children who kept her busy until her mid-thirties. At about this time, when her youngest was entering Kindergarten, Elizabeth’s mother hinted that perhaps Elizabeth should get a Real Job.

Sadly, Elizabeth was so delusional she thought writing a romance novel might qualify as a Real Job.

But! Five years later, to everyone’s surprise, she actually sold that romance novel (The Raven Prince) and began a rather successful career as a Romance Novelist. This was most fortunate since Elizabeth is singularly unqualified to do anything else but Make Up Stories.

Since then Elizabeth has written thirteen books to critical acclaim: The Prince Trilogy (The Raven Prince, The Leopard Prince, and The Serpent Prince); the Legend of the Four Soldiers series (To Taste Temptation, To Seduce a Sinner, To Beguile a Beast, and To Desire a Devil); and the Maiden Lane series (Wicked Intentions, Notorious Pleasures, Scandalous Desires, Thief of Shadows, Lord of Darkness, and the upcoming Duke of Midnight .) All of Elizabeth’s books are set in eighteenth century England and all feature a fairy tale story that serves as a foil to the main story.

Elizabeth lives in central Illinois with a pack of untrained canines and a garden in constant need of weeding.