Plotlines featuring scandal sheets have become a staple of the Regency-set historical romance, mirroring the current-day popularity of magazines and television shows devoted entirely to celebrity gossip. But did newspapers devoted to spreading tittle-tattle about the high and mighty really exist during the Regency period?

According to the Oxford English Dictionary, the term “scandal sheet” did not enter the lexicon until the first decade of the twentieth century. And an advanced search of Google Books reveals only a slightly earlier date, with citations from no earlier than the 1890s. But perhaps “scandal sheet” was simply not the term in use during the period for newspapers or magazine devoted to scandal?

In his book Scandal: A Scurrilous History of Gossip, Roger Wilkes sets the date for the publication of what we might today call full-fledged scandal sheets a good bit earlier than the existence of the term itself. But still not in the Regency. Gossip columns appeared in English newspapers as early as 1704 (when Daniel Defoe, known today for his novel Robinson Crusoe, created the informal “Advice from the Scandalous Club” for his new paper, Review), and gossip pamphlets on specific subjects were also published during the eighteenth century. But newspapers devoted entirely to scandalmongering did not begin to be published until the 1820s.

I’ve been wondering, then, if a more historically accurate analog to today’s People, Entertainment Tonight, and National Enquirer might be a “scandal sheet” of an entirely different sort than a newspaper: the popular satirical print. The period between 1760 and 1820 is often referred to as the “Golden Age of Caricature,” in part because of the prints satirizing the British Royal family that proliferated during this period. But many high-ranking political and social figures besides King George and his relations found themselves the butt of a satirical print’s pointed humor. The audience for such prints was wide, just as it is for today’s scandal sheets; the middling sorts as well as aristocrats could afford a sixpence for a plain folio mezzotint, or a shilling for a colored one, the typical price for a print in the late eighteenth century.

The Prince Regent, caught in bed with his mistress, Lady Jersey, by his wife

The Prince Regent ridiculed as a blockhead, along with many other famed political leaders of the day 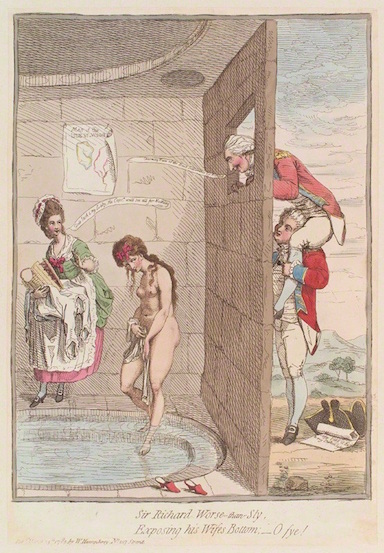 A major Regency scandal: the Worsley crim com trial, which brought to light shameful details of Sir Richard’s voyeuristic sexual tendencies, details which satirist Gillray did not shy away from skewering

Regency-era satirical prints have their roots in both visual caricature and in literary satire. In the late 16th century, Italian brothers Annibale and Agostino Carracci applied the words carico and caricare (to load, or to exaggerate) to some of the exaggerated portraits they drew, starting a trend for caricatures on the Continent. During the seventeenth century, art collectors and young men on the Grand Tour brought many examples of Italian caricatures back to England, some of which caught the eye of English publisher Arthur Pond. In 1736, Pond printed a collection of drawings by Annibale Carraci and other Italian caricaturists, which proved immediately and widely popular with London audiences. Noting the high sales of Pond’s collection, English artists soon began combining the exaggeration of the visual caricature with the biting satire of the period’s literature to create their own home-grown prints. Thus beginning a craze for satiric prints in England that lasted well into the nineteenth century. 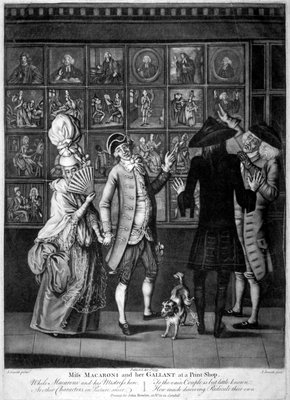 One of the earliest prints to feature a print shop, reputedly the Darlys’s shop on the Strand

During the seventeenth century, St. Paul’s and Fleet Street were where one would go to find shops devoted entirely to selling individual prints, right alongside booksellers and printers. Most sold both art prints and comic ones, although by 1762, satiric prints had grown so popular that Mary and Matthew Darlys, known as the “Fun Merchants” (at 39 Strand) opened a shop devoted entirely to comic prints. By the early 1800s, print shops had branched out westward along Fleet Street and the Strand, to the new developments around St. James’s in Westminster. John Bowles (under the sign of the Black Horse in St. Paul’s Churchyard), James Bretherton (134 Bond Street) and Mrs. Humphreys (in St. James’s) were some of the more popular purveyors. Publishers William Holland and Samuel William Fores even set up exhibition rooms that featured only prints, and charged entry fees to viewers. “In Holland’s Caricature Exhibition rooms may be seen, the largest Collection of Prints and Drawings in Europe,” claimed Holland’s advertisements; “The most complete Collection. Ever exposed to public View in this Kingdom,” countered Fores’s.

Given the often lewd, rude, and even pornographic nature of many of the era’s prints, it’s hardly surprising to discover that many Regency commentators bemoaned the open display of satirical prints in shop windows. Take for example, John Corry’s “Caricature and Printshops,” from his 1801 Satirical View of London:

This humorous mode of satirising folly is very prejudicial to the multitude in many respects: — in the loss of time to those who stop to contemplate the different figures; the opportunities given to pickpockets to exercise their art; and that incitement to licentiousness occasioned by the sight of voluptuous painting. The indecent attitudes obscene labels, and similar decorations, must have a powerful effect on the feelings of susceptible youth; and it is an authenticated fact, that girls often go in parties to visit the windows of printshops, that they may amuse themselves with the view of prints which imbue the most impure ideas. Before these windows, the apprentice loiters unmindful to his master’s business. And thither prostitutes hasten, and fascinating glances endeavor to allure the giddy and the vain who stop to gaze on the Sleeping Venus, the British Venus and a variety of seductive representations of naked feminine beauty. (75-77)

Mrs. Humphrey’s print shop, published by Mrs. Humphrey herself; the caption translates as “Shame on he who thinks evil of it”

Wouldn’t you love to attend one of those print shop-gazing parties? I know I would. In fact, it was after reading this passage that I had the idea to include a scene set outside a shop that peddles satirical prints in my latest historical romance, A Man without a Mistress. In the window of Bretherton’s (an actual print shop of the period), Sir Peregrine Sayre spies a print of the recently deceased Lord Saybrook cavorting with an obviously diseased courtesan. To keep the fast-approaching daughter of Lord Saybrook, Sibilla Pennington, from catching sight of the scandalous print (and thereby discovering the true cause of her father’s death, venereal disease), Sayre is forced to make a bet with her, a bet that will only entangle him further with the headstrong young woman whom he’d promised himself he’d stay far away from. And, of course, further scandal ensues . . .

If you’re interested in finding out more about Regency era satirical prints, check out these resources:

Donald, Diana. The Age of Caricature: Satirical Prints in the Reign of George III. New Haven: Yale UP, 1996.

About A Man Without a Mistress

A man determined to atone for the past

For seven long years, Sir Peregrine Sayre has tried to assuage his guilt over the horrifying events of his twenty-first birthday by immersing himself in political work—and by avoiding all entanglements with the ladies of the ton. But when his mentor sends him on a quest to track down purportedly penitent prostitutes, the events of his less-than-innocent past threaten not only his own political career, but the life of a vexatious viscount’s daughter as well.

A woman who will risk anything for the future

Raised to be a political wife, but denied the opportunity by her father’s untimely death, Sibilla Pennington has little desire to wed as soon as her period of mourning is over. Why should she have to marry just so her elder brothers might be free of her hoydenish ways and her blazingly angry grief? To delay their plans, Sibilla vows only to accept a betrothal with a man as politically astute as was her father—and, in retaliation for her brothers’ amorous peccadillos, only one who has never kept a mistress. Surely there is no such man in all of London.

When Sibilla’s attempt to free a reformed maidservant from the clutches of a former procurer throw her into the midst of Per’s penitent search, she finds herself inextricably drawn to the cool, reserved baronet. But as the search grows ever more dangerous, Sibilla’s penchant for risk taking cannot help but remind Per of the shames he’s spent years trying to outrun. Can Per continue to hide the guilt and ghosts of his past without endangering his chance at a passionate future with Sibilla?

Bliss Bennet writes smart, edgy novels for readers who love history as much as they love romance. Despite being born and bred in New England, Bliss finds herself fascinated by the history of that country across the pond, particularly the politically-volatile period known as the English Regency. Historical Novel Society’s Indie Reviews praised her first book, A Rebel without a Rogue, deeming it “a sparkling debut.”

Bliss’s mild-mannered alter ego, Jackie Horne, writes about the intersection of gender and genre at the Romance Novels for Feminists blog. (http://www.romancenovelsforfeminists.blogspot.com)