Lieutenant-General John Manners, Marquess of Granby PC (2 January 1721 – 18 October 1770) was a British soldier and the eldest son of the 3rd Duke of Rutland. As he did not outlive his father and inherit the dukedom, he was known by his father’s subsidiary title, Marquess of Granby. Granby served in the Seven Years’ War as overall commander of the British troops on the battlefield and was subsequently rewarded with the post of Commander-in-Chief of the Forces. He was popular with his troops and many public houses are still named after him today.

Granby was one of the first who understood the importance of welfare and morale for the troops. The character of British soldiering improved, and properly led the army was unbeatable in war. Nearly all the portraits show him mounting a horse, or helping the wounded. On 7 June 1760 he wrote to Viscount Barrington, Secretary at War, receiving a reply ten days later making enquiries as to the Hospital Board accommodation for his wounded men.

Granby’s tactical skill commanding the allied cavalry required courage, control and communication, also bringing Horse artillery to bear. The victory at the Battle of Warburg in July 1760 of an army three times the size distinguished his generalship, and marked the man as a genuine British military hero. His opponent, the duc de Broglie, was so impressed that he commissioned a portrait of Granby by Sir Joshua Reynolds. 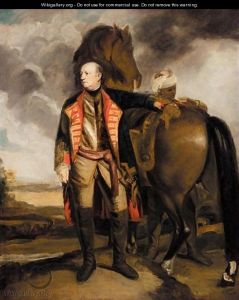 He is probably best known today for being popularly supposed to have more pubs named after him than any other person – due, it is said, to his practice of setting up old soldiers of his regiment as publicans when they were too old to serve any longer.

The Marquis of Granby, Waddingham

An incident between an aging Granby and Frances Hayman, the famous theatre set-designer and painter at Vauxhall Gardens, appeared in The Vauxhall Papers in 1841.

Sadly, after his military and political career ended, Granby suffered from financial problems. A close family friend wrote this after learning of his death:

“You are no stranger to the spirit of procrastination. The noblest mind that ever existed, the amiable man whom we lament was not free from it. This temper plunged him into difficulties, debts and distresses; and I have lived to see the first heir of a subject in the Kingdom have a miserable shifting life, attended by a levee of duns, and at last die broken-hearted.”

Belvoir Castle, the seat of the Rutland dukedom