Rebecca, Lady Overton prefers to be out of the public eye. Before she consented to join her author for tea in Susana’s Parlour, she extracted a promise that this interview would not be published until more than 200 years in her future.

“I have had notoriety and notice enough for a lifetime, Jude,” she says. “You saw to that.”

Becky is right. As the Rose of Frampton, treasured mistress to the notorious Marquis of Aldridge, she was whispered about (but not acknowledged) the length and breadth of polite Society. It is no consolation to her that I was only doing my job, nor that I did not know anything about her history when I started. I thought to write a cheerful romp about a dissolute rake, not a story about how a woman with few choices nonetheless made the best ones she could, and eventually won her way to a happy marriage and a secure family.

She does not wait for an answer to her remark. “And you are still doing it,” she scolds. “This latest start of yours has spread my story to countries that did not even exist when I was alive. That smug look does not make me feel better, you know!”

I wipe the grin off my face. I have been posting A Baron for Becky on Wattpad for months, one chapter a week until it was completed. In the past month it has taken off, garnering hundreds of reads every day. I am particularly thrilled that 15% of my reads are from India, another 10% from the Philippines, and more than 50% overall from countries in Africa and Asia where I do not normally sell books.

“You have to admit,” Becky continues, “it is not at all a light, frothy read. Girlhood trauma? Years of suffering? Two heroes, Jude, and neither of them particularly heroic seen in a certain light.”

“It is a story of resilience, Becky. You survived, and eventually you thrived. And both your first hero and your second helped with that. More than they hindered, I am sure you will agree. Did you know that Susana, our hostess today, has a story on Wattpad that is actually called ‘Resilience’? You might enjoy meeting her heroine. You have some sad circumstances in common.”

“Ah,” Becky says. “Betrayed into a brothel, was she? Poor girl.”

“It comes right in the end,” I sooth. “After all, we write happy endings, Susana and I.”

Becky’s speaking look states her opinion as loudly as words. Perhaps that which does not kill you makes you stronger, but the memories and the scars remain, giving a dark underpinning the future happiness. I dream that people who have had their choices torn from them will find hope and the courage to find new choices by reading stories about heroines like Becky. But pain endured and overcome is still pain.

“We are about to start posting a new book, Mari Christie and I,” I tell Becky, hoping to change the direction of her thoughts.

It works. “Mari Christie? She writes as Mariana Gabrielle, does she not? She created my dear friend Kali. Is the book about her?”

“No, indeed. This is something different. Never Kiss a Toad is about the romance between Aldridge’s daughter Sal and his friend Wellbridge’s son David. The first part goes up next Friday.”

About Never Kiss a Toad 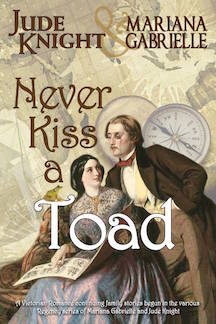 David “Toad” Northope, heir to the Duke of Wellbridge and rogue in the mold of his infamous father, knows Lady Sarah “Sal” Grenford, daughter of the once-profligate Duke of Haverford, will always hold his heart. But when the two teens are caught in bed together by their horrified parents, he is sent away to finish school on the Continent, and she is thrown into the depths of her first London Season.

Can two reformed rakes keep their children from making the same mistakes they did? The dukes decide keeping them apart will do the trick, so as the children reach their majority, Toad is put to work at sea, learning to manage his mother’s shipping concern, and Sal is taken to the other side of the world, as far from him as possible.

How will Toad and Sal’s love withstand long years of separation, not to mention nasty lies, vicious rumors, attractive other suitors, and well-meaning parents who threaten to destroy their future before it has begun?

To be published in weekly instalments on Wattpad, alternating between Mariana Gabrielle’s page and Jude Knight’s.

(Mariana Gabrielle is also posting Royal Regard, in which you can read about the fraught and beleaguered courtship of Toad’s parents, and Jude is posting stories from her collection Hand-Turned Tales.)

About A Baron for Becky 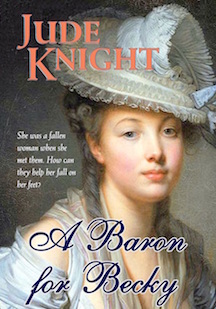 Becky is the envy of the courtesans of the demi-monde – the indulged mistress of the wealthy and charismatic Marquis of Aldridge. But she dreams of a normal life; one in which her daughter can have a future that does not depend on beauty, sex, and the whims of a man.

Finding herself with child, she hesitates to tell Aldridge. Will he cast her off, send her away, or keep her and condemn another child to this uncertain shadow world?

The devil-may-care face Hugh shows to the world hides a desperate sorrow; a sorrow he tries to drown with drink and riotous living. His years at war haunt him, but even more, he doesn’t want to think about the illness that robbed him of the ability to father a son. When he dies, his barony will die with him. His title will fall into abeyance, and his estate will be scooped up by the Crown.

When Aldridge surprises them both with a daring proposition, they do not expect love to be part of the bargain.

Follow A Baron for Becky on Wattpad, or purchase while it is on sale for 99c 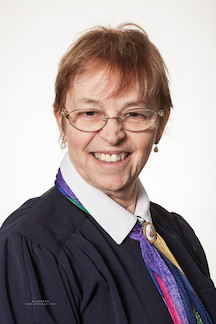 Jude Knight has been telling stories all her life: making up serial tales to amuse her friends and children, imagining sequels to books that have moved her and left her wanting more, occasionally submitting short stories to magazines and the radio, starting more than a dozen novels set in different times and places.

She has devoted most of the last forty years to a career in commercial writing and raising a large family (most recently as grandmother-in-residence while a daughter was out of action for three years). She and her own personal romantic hero, with whom she has shared those forty+ years, now live with two cats and frequent visitors in a small town in rural New Zealand.

Judy wrote and published her first historical romance in 2014, and now has the wind in her sails and a head full of strong determined heroines, heroes with the sense to appreciate them, and villains you’ll love to loathe.

8 thoughts on “Jude Knight: A notorious woman visits the Parlour”