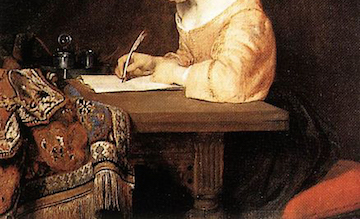 An Invitation to a Wedding

I hope this note finds you well and that the severe storms of last week did not interfere with the children’s Christmas. I so sincerely planned to spend Christmas Day with the children, but a most urgent matter arose in the district of my birth regarding my maid’s cousin. Her husband, the vile man, was SELLING her, imagine! I trust you will understand my absence at your Yuletide table, and I will certainly relate the particulars to you later, though the matter has been resolved in a way that I am resigned to finding satisfactory.

But Miss Harris, this is not why I’m writing. You will find the following information most irregular, perhaps, but I beg your indulgence and count on the liberality of your friendship. The weather being quite bad, I arrived only yesterday in London and am staying at the home of Viscount Cathmore, the most kind and gentle man who now has the estate that was once my family’s.

Miss Harris, please do send a note back with my messenger and tell me that you will visit me here in Grafton Street tomorrow afternoon, for Lord Cathmore and I are to be married then by Special License.

I am sending along some of Cook’s exquisite biscuits for the children, and you must plan tomorrow to stay for dinner and hear Hamish’s most generous proposals for the children. He is quite rich, and I do hope you will come and hear him out.

Do let me know that you will come, for your friendship means so very much to me, and you must let me know if any of the girls are ready for service as I am in sore need of a new maid.

When a young woman is put up for auction in a wife sale, Rosalyn Montagu seizes the chance to rescue her—and to recover a treasured family heirloom, her father’s signet ring. Her plans are thwarted by the newly anointed Viscount Cathmore who finds her provoking beauty, upper crust manner, and larcenous streak intriguing. Her secrets rouse his jaded heart, including the truth of her identity—she is the woman whose home he has usurped. But more mysteries swirl around Rosalyn’s past, and Cathmore is just the man to help her uncover the truth.

“A woman cannot buy a wife,” someone said. “‘Tis unnatural.”

Rosalyn rallied herself. “What is unnatural is selling a human being,” she shouted. “What is a travesty is to celebrate our Lord’s birthday by selling a mother and child to God knows what fate.”

The crowd rumbled angrily. Mindy spoke, but Rosalyn could not hear her words, and a hard look from Ned Morgan silenced his property. Mindy cast her eyes down until he turned away, then went back to her bold appraisal of the crowd.

“I will bid in your behalf,” Cathmore said quietly to Rosalyn. “Do you agree?”

Her heart pounding, she nodded.

“What is your limit?”

Her limit? Surely the notes in her boot were more than enough to outbid this lot. She would hope to not go that high; it would mean an entire year of leanness, not just for her, but for the orphans.

And yet, a woman should not be sold, even if it meant no sweets for the children and Rosalyn’s own sacrifices.

“I will tell you when to stop,” she said.

“Very well.” He stood tall. “You may disregard the lady’s bid.”

“Then get on with it,” Ned Morgan shouted.

The wizened auctioneer rapped the bar again and called for bids.

“Tuppence, I said.” The bid came again from the bar.

That voice came from nearby, and Rosalyn recognized it. Mr. Logan’s strong tenor resonated with determination. He exchanged a look and a nod with Cathmore, and smiled at Mindy, who sent him a glowing smile in reply.

Ned Morgan’s big fist came down on the bar, rattling glasses. “It’s not enough, Logan,” he shouted. “Not for what ye done.”

Rosalyn tasted bile. They all knew each other. Cathmore, Logan, Morgan.

He called out her bid and sent Logan the smallest of shrugs. Logan countered, Morgan pounded, and Rosalyn looked for Nelly.

What is she doing?

Nelly had moved closer to Ned Morgan, her eyes glittering with excitement. Not pain, not worry over her cousin, and not desire to hold her baby nephew.

Hot anger spiked in Rosalyn. The cause was just, but the drive to come here had been Nelly’s. That she had no interest in the babe did not surprise Rosalyn—Nelly didn’t like children—but her gaze was on Morgan, not Mindy.

A commotion at the center of the room drew everyone’s eyes. Two men had squared off, their jaws moving, their fists poised. Morgan shouted at the auctioneer, the men, and the crowd, and sent angry glares at Logan and Cathmore. His eyes landed on Rosalyn and he bellowed louder.

Rosalyn could not keep track of the bidding, but she could hear Cathmore’s rumble and the auctioneer’s, and the melodic, determined tones of Logan.

She felt dizzy, and hot, and more than a little worried. She heard Cathmore call out a bid, but she didn’t know if it was pence, or shillings, or something more. She touched his arm to get his attention. “What is the bid?”

Behind them, another melee flared. The auctioneer pounded, and men shouted. A body veered and pushed her at Cathmore, who caught her close and led her quickly away from the trouble and into the private dining room.

Rosalyn struggled to breathe. His arms held her loosely, but his nearness took her breath away. No man had ever held her like this, and she had trouble finding her composure.

His lips pressed down on hers and silenced her.

Award winning author Alina K. Field earned a Bachelor of Arts Degree in English and German literature, but she found her true passion in reading and writing romance. Though her roots are in the Midwest, after six very, very, very cold years in Chicago, she moved to Southern California and hasn’t looked back. She shares a midcentury home with her husband and a blue-eyed cat who conned his way in for dinner one day and decided the food was too good to leave.

She is the author of the 2014 Book Buyer’s Best winner in the novella category, Rosalyn’s Ring, a Regency novella; and the novel-length sequel, a 2015 RONE Award finalist, Bella’s Band, both Soul Mate Publishing releases.