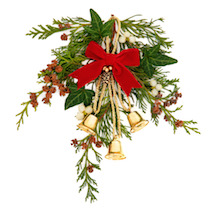 Christmas Dinner, served around midday, might feature a boar’s head (really a pig, since there weren’t any boars around by then), roast goose or roast turkey (which came to England from the New World around 1550 and rose in popularity through the eighteenth century). These were accompanied by vegetables such as boiled or steamed brussels sprouts, carrots, parsnips, and roast potatoes (sometimes boiled or mashed), as well as stuffing.

According to legend, Henry VIII was the first to have turkey served at Christmas. In A Christmas Carol (1843), Scrooge sends the Cratchitts a large turkey for their Christmas dinner. But turkey did not become a popular favorite in England until the 20th century.

The meal would be accompanied by wine or wassail (See December 13th post), which was often made with sherry or brandy.

For dessert, there was always a Christmas pudding (See December 3rd post), which might be served with brandy butter or cream. Although it was sometimes called “plum pudding,” there were no plums—only raisins. Mince pie was another traditional favorite (See December 4th post). There might also be gingerbread and marzipan and other popular sweet treats.

After dinner, the family might gather around the pianoforte (if there was one) and sing carols such as Deck the Halls, Here We Come a-Wassailing, and While Shepherds Watched Their Flocks. Most other Christmas carols sung today are of German origin and didn’t spread to England until Victorian times.

Traditionally, a small tithe was given to a landowner on Christmas Day, and sometimes children might receive a small toy, but the Regency Christmas was not a time of gift-giving as it is today. All in all, Christmas was a time for family to assemble together and celebrate the Christmas-tide Season.

A Twelfth Night Tale is on sale for the remainder of 2014!

In A Twelfth Night Tale, the Barlows celebrate the holiday with their neighbors, the Livingstons, and the St. Vincents—a wealthy viscount who is courting the elder daughter Lucy and his three daughters. Andrew Livingston, who has returned wounded from the Peninsula, suffers a few pangs of jealousy as he watches the viscount’s attentiveness to the now-grown-up-and-very-desirable Lucy. Is it too late for him to stake a claim for her?

One thought on “A Regency Christmas Dinner”