2014 is the final year of Ellora’s Cave’s Cotillion Christmas anthologies. Enjoy these sweet Regency Christmas tales this year while you still can!

I’m Jillian Chantal and want to thank Susana for having me here to talk about my new release, a Christmas story from the Cotillion Collection at Ellora’s Cave.

I love Christmas stories and when I saw the call for this year’s stories based around the Regency Christmas feast, I had an idea for a young lady who never seemed to be able to behave quite properly. She skated on the edge of scandal her entire life and her father was concerned she would land in the middle of one before she could be married.

Since her first season was a failure, the heroine’s father betroths her to an old friend of her brother who she hasn’t seen in years. The heroine’s reaction to what she sees as her father’s betrayal is to run away. That’s when the story starts.

I love to write pert, sassy heroines and I hope this one pleases the reader. The cover of this book made me giddy with delight. The couple is absolutely perfect for the story. He’s handsome and witty and she’s sassy. The cover epitomizes them and their personalities.

About The Size of the Scandal 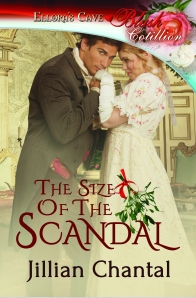 Charlotte Greystone can’t seem to stay out of trouble. When her father betroths her to a man she hasn’t seen in almost ten years, she runs away. Never mind that it’s days before Christmas and she has no survival skills.

When she’s almost crushed by hunters on horseback, a handsome man on a black stallion comes to her rescue. Not thinking of the scandal of being alone with a strange man, she allows him to assist her in returning to her home.

The next day, Charlotte is appalled when the butler announces her betrothed—the same man she shared a horse with the day before. Terrified he will tell her father of her behavior or cause an even bigger scandal by breaking off the engagement, Charlotte is knocked off-kilter—and stays that way as she spends the hours until Christmas trying to understand the man.

An earl’s daughter on the cusp of womanhood is shocked to discover her father has betrothed her without her knowledge to a man she hasn’t seen for nearly a decade: a man she remembers as being short and stubby.When it turns out that “Stubby”is not only a war hero, but also tall and excessively good-looking, she begins to see how childish she has been. Fully expecting Major Cavanaugh to reveal her behavior to her parents, she is gratified and intrigued when he does not. But that doesn’t mean he’ll go through with the marriage after everything that’s happened. And that’s when Charlotte begins to realize that she might have inadvertently ruined her chance for a real-life happy-ever-after.

Young girls might dream of fairy-tale romance, but in the Regency, quite often marriages were arranged for quite different reasons. Eventually, a young woman must put away childish things and learn to deal with reality in a more mature manner. Happiness is, after all, a choice. And sometimes love pops up in the most unexpected places.

Jillian Chantal lives in the beautiful state of Florida, where she works in the legal profession as well as writing romance novels in her spare time. She is multi-published in the romance genre. She is the mother of two sons and enjoys the laid-back Florida lifestyle. Other hobbies are photography and travel. She uses both as inspiration for her fiction work. Jillian loves to hear from readers.

Other Stories in the Cotillion Christmas Feasts Series

The Size of the Scandal by Jillian Chantal

A Christmas Scheme by Christa Paige and Vivien Jackson

11 thoughts on “Jillian Chantal: The Size of the Scandal”