Christmas Traditions is the theme of this year’s Ellora’s Cave Blush Cotillion Christmas series. Eight stories focusing on Christmas traditions during the Regency will be released digitally, and then in print version as two anthologies.

The eight stories in the series are:

The inspiration for this story came from searching for a place to stay in England for the first night of our summer trip. Looking for someplace not far from Dover, I found a B&B called “Centuries” in the town of Hythe, right on the coast. It’s situated in an old ragstone building that served as an almshouse from the 13th Century up until the 20th Century. The pictures on the website looked so cool that knew I just had to stay there. Fortunately the rates were quite reasonable, they had vacancy (since this was several months in advance) and the owners love history as much (or more) than I do. Even though I hadn’t set foot in the place yet, I knew I wanted to use the building as the setting for a story.

It didn’t  fit my original idea for a “Christmas Traditions” story, so I picked a different tradition—giving alms to the poor.  Of course, then I had to write the story and submit it before I actually had the pleasure of staying at “Centuries,” but I knew I would have the chance to make some revisions before publication to add details about the place. I also used another historic home about ten miles away, Godinton House, and I incorporated as characters some members of the family who lived there at the time the story was set. And then during revisions, I decided I needed another site in the northern part of the county and was able to use another really cool house (with it’s own moat and clock tower) Igtham Mote. 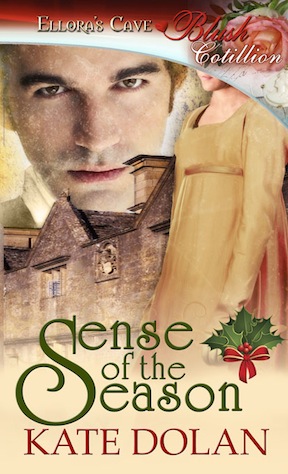 Before this trip, it had been over 20 years since I’d been to England, and it might be another 20 before I get to go again, so I was trying to soak up every detail and visit as many historic houses as I could to use in future tales. I can’t tell you how many times I made my husband stop the car so I could take a picture of something that caught my eye. Eventually I just started taking pictures through the windshield. They’re not exactly frame-worthy, but they will help me remember potentially useful details.

I would love to set another story in Hythe at an earlier period when the town was in its heyday as a medieval  port. Many pilgrims from the Continent landed at Hythe on their way to Canterbury Cathedral. Maybe someday I’ll write my version of Canterbury Tales. Who knows?

To learn more about “Centuries” including the archaeology work done on the site, visit http://www.hythekentarchaeology.com/.

About Sense of the Season

There are many people William Fletcher would prefer to never again encounter in life, but if forced to rank them, he just might put Matilda Blakethorn at the top of the list. She humiliated him at the age of nine, and truth be told, scared the wits out of him for years after.

So now, waking up after a night of heavy drinking to find her looming over him is a bit of an unpleasant surprise. Especially since he has no place else to go.

Matty Blakethorn doesn’t recognize the bedraggled stranger sleeping on the floor of the St. Bartholomew’s Almshouse. But when he unwittingly ends up staying to help with repairs, the old acquaintance is renewed.  And while neither Matty or William is anxious to admit the troubles that have driven them to such a humble place, Christmas is a time of sharing and giving and reconciliation. When William finally reveals his greatest failing, Matty must decide whether she can again face the demon that already destroyed her life once before.

Kate Dolan was a terrible lawyer, so her decision to turn her back on the corporate world was a great relief to everyone, especially those in the corporate world. Since leaving the rat race, she has worked as a newspaper columnist, preschool teacher, bookkeeper and jump rope coach. A self-proclaimed “history nut,” she volunteers as a living history interpreter at historical sites near her home outside Baltimore and loves to share facts about the past, especially the gross ones.  When she grows up, she hopes to become a professional roller coaster rider with her daughter. She writes historical fiction and romance under her own name and contemporary Christian mysteries and children’s books under the name K.D. Hays.  Connect with her on Facebook  or at www.katedolan.com.

3 thoughts on “Cotillion Christmas Traditions: Kate Dolan and “Sense of the Season””