Today my guest is Eva Scott, who recently joined a Facebook group called History Lovers, which was originally formed by several of us who were teammates in Savvy Authors NANO Smackdown with Entangled Editors last fall. We’re all history lovers, of course, and we write historical romance, although with quite diverse settings.

Thanks, Susana. It’s great to be here! I’d like to begin by talking about the role of women in ancient Rome.

While my novel The Last Gladiatrix is set in Rome my heroine is not actually Roman.  Xanthe is a Sarmatian, the people who are thought to be the source of the Amazon legend.  Sarmatian women fought side by side with their men in times of war, being equally as skilled in archery as in cooking up a mean pot of lamb stew for afterwards.  Their lives revolved around horses and many Sarmatians were bow-legged as a result of the custom of putting children of both sexes on horseback before they could walk.  The Sarmatians were a nomadic people travelling with the seasons, tending their flocks of sheep and goat not unlike their ‘cousins’ the Scythians or the Alans.

Roman women, however, were not quite as free.  A Roman woman was controlled by her father even after she married.  Her father could order her divorce if he so choose—even if the couple in question didn’t agree!  Once her father died she didn’t automatically pass into the authority of her husband.  If her father appointed a tutor before his death then that man would become her legal guardian.   Yet there was a way out from under the yoke.  If a free-born woman had three legitimate children, and her father was dead, she was rewarded the right to legal and economic independence from her tutor.

It wasn’t all gloom and doom for Roman women.  In the ideal Roman family a husband and wife shared a partnership and made important decisions together.  Not unlike our family model of today.  And there is a lot of historical evidence for the important role mothers played in their son’s life—for better or for worse.  Women often manoeuvred for power in the back rooms and salons of Roman society.  A powerful man often had a strong, clever woman helping behind the scenes.  And the older a woman became the more weight her opinion carried and the more respect she earned. I don’t know about you but I do like the sound of that! 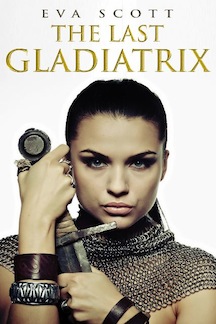 About The Last Gladiatrix

Captured and enslaved by a Roman legion, Xanthe never expects to end up training for the Coliseum floor, but every night after the day’s march, she is put through her paces by a Roman solider who challenges her, tests her, and excites her.

Titus is drawn to Xanthe, her fire and her spirit, so he breaks one of his rules and brings notice on himself, offering to train her as a gladiatrix to spare her a courtesan’s role. But training her, working with her, soon becomes too much. Titus knows the penalty for taking property that does not belong to him, but how long can he resist?

The flash of her green eyes in the candlelight reminded Titus of the verdant wild forests of Northern Italy, which they had recently left. He rubbed a smear of dirt from her cheek with his thumb, and then taking her hand, he raised Xanthe up to stand. With deliberate, slow movements he unfastened her tunic, letting it fall from her shoulders to pool on the ground at her feet.

Xanthe made no move to stop him, their eyes locked, her fear and trust clear to see. He slid his fingers beneath the waist of her leggings and tugged them down over her hips, leaving her naked, standing there before him.

Titus took a sponge and dipped it into a bowl of warm water, letting it soak before applying it to Xanthe’s flesh. He washed her with firm yet gentle strokes, and as the water ran over her skin it dripped deliciously from her breasts. The centurion bent his head and licked at a droplet, pleased to feel her shudder in response. Her nipple hardened, inviting him to explore further. He needed no invitation. Xanthe had to summon all her self-discipline to stand still while Titus explored the curves of her body. His touch turned her core to molten fire; she could barely contain her need.

I live on the Sunshine Coast, in Queensland Australia with my fabulous husband and gorgeous little boy. When I’m not writing romance you can find me out on the water kayaking, fishing or swimming. When on dry land it’s all about the shoes and the coffee.

6 thoughts on “Guest Author Eva Scott and The Last Gladiatrix”