I suppose you could say that Jane Austen was actually the first, but while she simply wrote about life in the time in which she lived, Heyer had to do so from a distance of a hundred years.

Heyer took pride in the historical authenticity of her novels, which was possible only as a result of a great deal of research on such things as daily living, fashion, transportation, famous personages, and the language that was used at the time. While critics complained that her books included too much detail of daily life at the time, in reality, this was necessary because Heyer’s readers needed it in order to understand the historical setting. And in Heyer’s stories, the setting is nearly as important as the plot!

Heyer’s first novel, The Black Moth, was written in serial form to entertain her brother in his sickbed. Her father liked it so much that he sought to have it published, which it was, in 1921. In 1935, the first of her Regency romances, Regency Buck, was published, and even though she also wrote thrillers and a few contemporary pieces, her Regency romances far outsold them. In spite of the fact that she refused to do anything to promote them.

I think the first Heyer Regency I read was Cousin Kate, which had come out only a couple of years before. I was a freshman in high school and had won a $25 gift certificate (for being the top Spanish student) to the local college bookstore. I think my teacher expected me to buy a dictionary or something, but instead, I found the romance section and loaded up. (I think most of the books were 75¢ or less, so I had quite a bagful when I left the store.)

And that was how it all started. After reading all of Heyer’s Regencies—more than once, mind—I moved on to other authors. Historicals were always my favorite, but the Regency time period has always had a special place in my heart. Why? I’m not sure I can pin it down. I did make a stab at it in a recent blog post for The Romance Reviews, though.

If you haven’t discovered Georgette Heyer’s Regencies yet, don’t wait any longer! And if you find yourself as crazy about them as I am, you might want to buy the whole lot of them. Last year, all of her books were made available for $2.99 each during the month of August, Heyer’s birthday. Make a note in your calendar and stock up!

Which of Georgette Heyer’s books is your favorite? What do you like most about her stories? 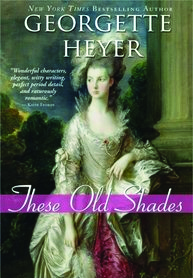 2 thoughts on “Georgette Heyer: The Grande Dame of Regency Romance”